An unusual release for August 2020 in Asia (excluding Japan) is the G-Shock G-8900GB-1. (The G-8900GB-1ER is also expected in Europe.) It’s unusual because we haven’t seen much of the 2011-born G-8900 in a very long time, though the solar-powered GR-8900-1 is readily available from Amazon. Black and gold is a popular combination, so the colorway isn’t surprising, just the fact that it’s a lone G-8900 release in a year dominated by all-new models and the usual classic cases. Despite its recent obscurity, there’s nothing wrong with the G-8900, as it’s a fine example of rugged and practical G-Shock design. (The solar-powered GR-8900-1ER was issued to Royal Navy Divers.)

The G-8900GB-1 has a large case with a convenient front LED backlight button and a metal bezel with a gold IP surface. Casio-intl.com lists the G-8900GB-1 as having a stainless steel bezel, but this could be a mistake as previous G-8900 (and other 8900 series) watches have an aluminum bezel. Other features include 200-meter water resistance, flash alerts, multi-time for 4 cities, world time, 1/100 second stopwatch, 24-hour countdown timer, 5 daily or one-time alarms, auto LED light, and an approximate 3-year battery life. 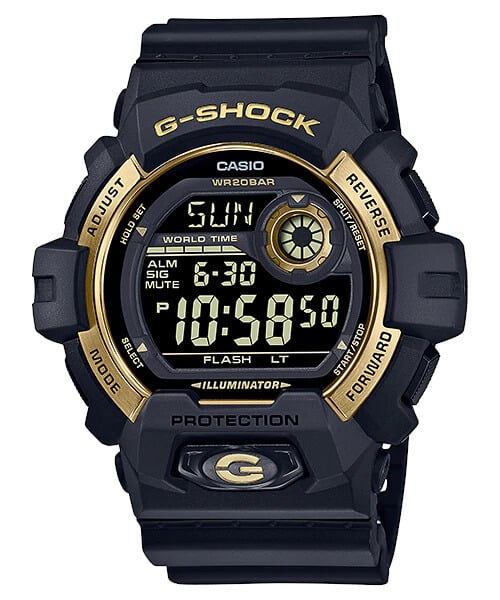