The G-Shock 35th Anniversary Origin Gold Collection has just been officially announced by Casio and as we suspected all three models have a screw-back case. This collection will likely be one of the highest in demand for the year as it is the closest representation of the origin of G-Shock. With its buttons, buckles, and stainless steel band keepers given a gold IP treatment to commemorate the anniversary, the DW-5035D-1B, DW-5735D-1B, and GF-8235D-1B Frogman pay tribute to the first G-Shock model, the first round-face model, and the second-generation Frogman diver’s watch. The DW-5035D-1BJR (list price ¥20,000 JPY), DW-5735D-1BJR (¥20,000 JPY), and GF-8235D-1BJR (¥48,000 JPY) will be released on April 13 2018 in Japan. Unlike the original leaked photos, the DW-5735D and GF-8235D have gold-tinted LCD displays.

The ​​DW-5035D-1B is based on the first G-Shock model ever released, the DW-5000C from 1983. (Reader Tak has pointed out that the color scheme resembles the DW-5000C-1B, which was one of the original 1983 models along with the DW-5000C-1A.) Like the original it has a screw-back stainless steel case and features the brick wall pattern surrounding the display. Also like the original it is battery-powered and has a standard LCD display. As with previous DW-5000 anniversary releases, the ​​DW-5035D features the Project Team “Tough” logo in tribute to G-Shock creator Kikuo Ibe and his team of Casio engineers. Like the GW-5035A-1 35th Anniversary watch from late 2017, demand for the ​​DW-5035D is expected to be extremely high as it is a must-have piece for serious collectors. 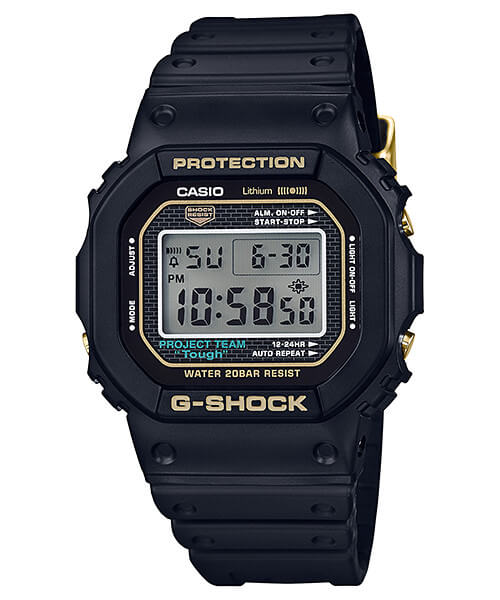 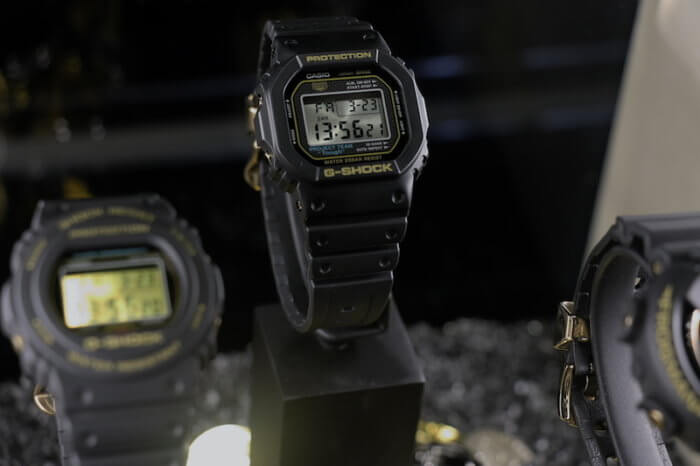 The DW-5735D is part of this year’s DW-5700 revival. The new DW-5700 series is based on the DW-5400 and DW-5700 from the mid-1980s which were the first round-face G-Shock watches. This model has a screw-back stainless steel case like the original DW-5700, so it is different than the standard DW-5750 releases of this year. The DW-5725B-7 Rising White model from the 25th Anniversary was also a screw-back, so this is not unprecedented, but it is a nice surprise with a model that we were not expecting this year. 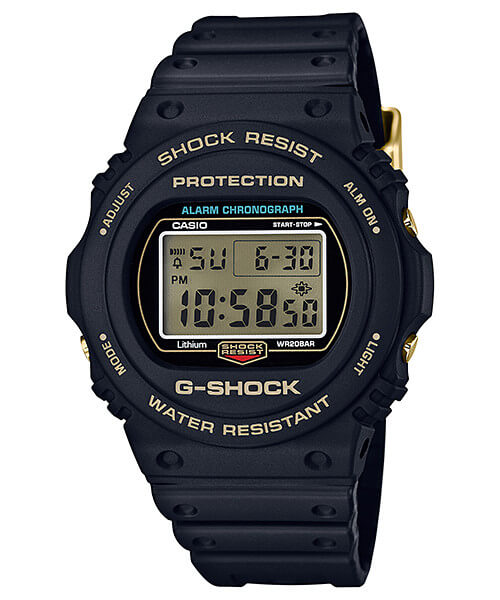 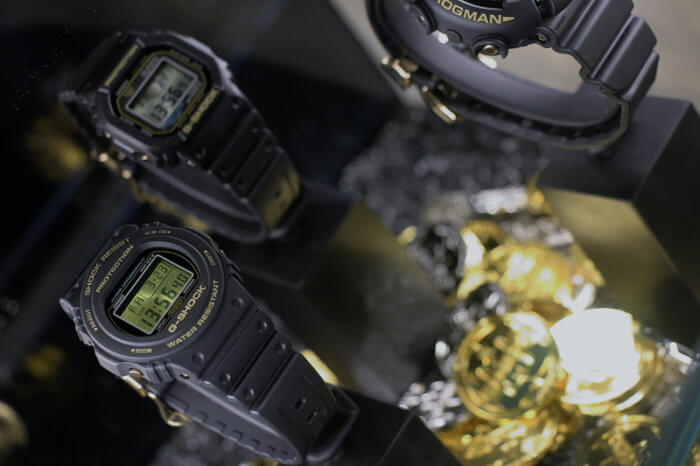 The base model (GF-8250) of the Frogman GF-8235D-1B is inspired by the exterior design of the second-generation Frogman DW-8200 from 1995. Like all Frogman models it has a screw-back stainless steel case and is an ISO Diver’s 200M watch. Unlike the early Frogman watches this one has Tough Solar power and a tide and moon graph. Zona Casio reports that this model has a DLC coating on the bezel and the rest of the case may be coated as well (no official confirmation on this yet but it does appear that the bezel has a DLC coating). 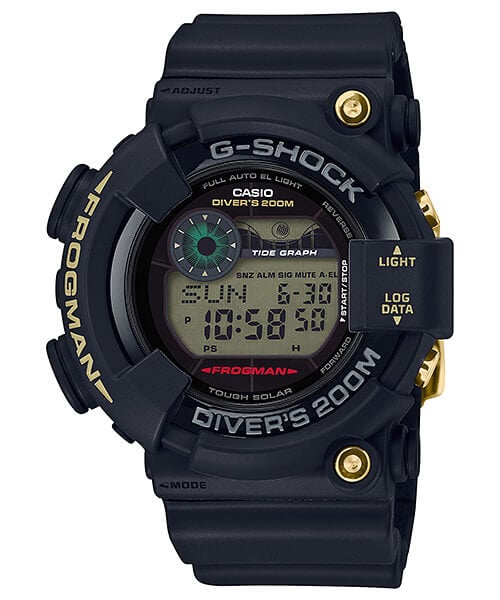 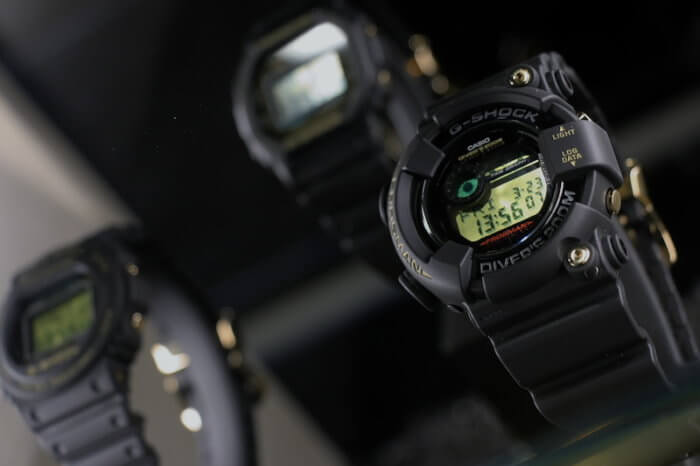 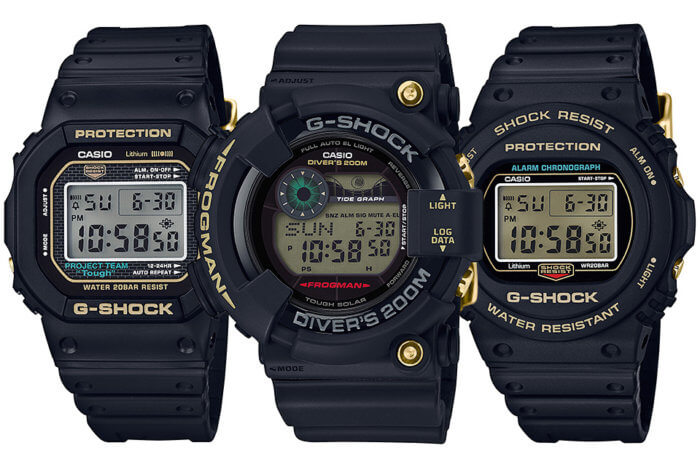 Another fan blog recently revealed an upcoming G-Shock 35th Anniversary collection and was kind enough to share the photos with us. Casio is going full retro with this “D Series” which includes the GF-8235D-1B Frogman, ​​DW-5035D, and DW-5735D. These models have a gold theme with gold buttons and band keepers along with light gold lettering and display accents. (Update: The collection was on display at Baselworld 2018 and Japanese media referred to it as the “Origin Gold” collection.)

G-Shock Frogman GWF-D1000 with Depth Gauge and Compass
Disclosure: G-Central is managed by fans and supported by ads. We may earn a commission on purchases from our links to Amazon, eBay, and Reeds Jewelers. Please follow your country's official G-Shock site for additional release information.

Hello, G-Central san.
Thank you for your always good report.
I think that the basic model of DW-5035D is not DW-5000C-1A but DW-5000C-1B.
Because the lettering and ring of this new model are golden.
Thank you.

Yes you are right, thanks for the correction!

wondering if they have few version of dw-5635. like they did on the last 30th anniversary. gset 30 and 5030c. well just hope they have something. cant wait

I am fortunate to live very close to one of the few G-Shock World Boutiques. It always has the special editions and loads of MR-Gs etc. I bought the last GF-8235D this afternoon. Despite the low price (JDM price perhaps?), this is the real deal. It is very obviously a cut above other mainstream Gs. I’ve been wanting a Frogman for a very long time, but those I have tried were always too large. This is a worrying feature of G-Shock “development”. This is not too large. In fact, compared to the current crop of Mudmasters and Aviators, it actually looks quite small. The entire circle of the case and the strap connectors fall within the “plane” of my 7.5 inch wrist. This is a very important aspect of this model. If you can get your hands on it, I highly recommend it.