Update: The G-Shock GSW-H1000 smartwatch with Wear OS and a color touchscreen was officially revealed. (Follow link for more information.)

Update: Two sources reported on an upcoming G-Shock smartwatch. Japanese site Impress Watch published an article stating that a G-Shock smartwatch will be launched in fiscal 2020. The article states (translated by Google), “Casio Computer Co., Ltd. announced its mid-term business plan together with its fiscal 2018 results on the 15th. The G-SHOCK smart watch will be launched in fiscal 2020, and the watch business aims to achieve sales of ¥ 200 billion in fiscal 2021 … In addition, the G-SHOCK brand smart watch (G-smart) will also be launched in 2020. We are expecting sales of around 10 billion yen by genre development taking advantage of G-SHOCK brand, toughness, and strength in the outdoor field.” Another Japanese media outlet, ITmedia News, also published an article about an upcoming G-Shock smartwatch. The article states (translated by Google), “Casio Computer will introduce “G-SHOCK” brand smart watch, commonly known as “G-SHOCK smart” in 2020. It was revealed at the briefing session on May 14th.” So, it looks the G-Shock smartwatch is really happening. The “fiscal 2020” release time could mean sometime in 2020 or early 2021. In Japan, the fiscal year is from April 1 to March 31.

Update 2: News.mynavi.jp also published an article confirming that G-Shock is planning to release a smartwatch in fiscal 2020.

Original Article (in which we weren’t sure if the G-Shock smartwatch was confirmed): 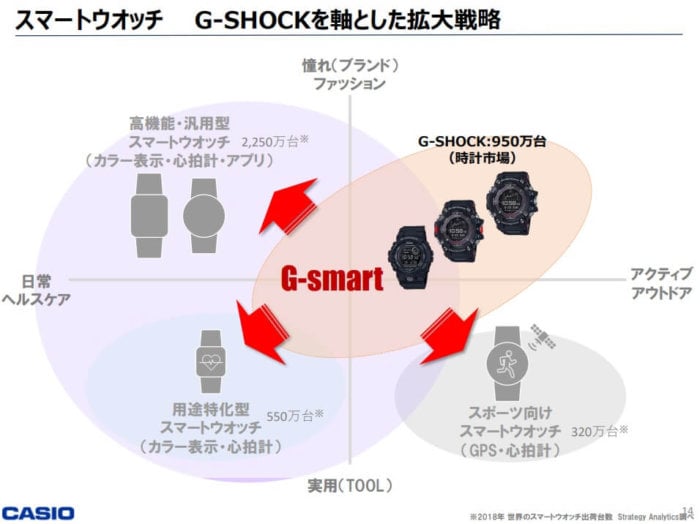 The Japanese fan blog Great G-Shock World wrote a post with the translated title, “G smart! ? Boldly forecast G-SHOCK smart watch scheduled for 2021!” and goes on to say (translated by Google), “As for G Smart, it is possible that it will be a complete smart watch that makes the same feature as Apple Watch, such as linking with a call function or SNS, by taking over the frame function of the watch function. size, secure the size of LCD screen like GPR-B1000 to ensure high visibility, and enhance operability with large buttons. Such a model is expected.”

We scanned through the document and found this intriguing graphic (shown above). If Casio is not in fact planning to release a G-Shock smartwatch, it appears as if it is at least exploring the possibility. This graphic implies that, along with a full-fledged smartwatch like the Pro Trek Smart WSD-F30, Casio is also looking into developing other types of G-Shock devices such as heart rate monitoring fitness watches and GPS running watches. Unfortunately, we do not have a Japanese translator on hand for these documents. Again, we’re not sure if the document states that a smartwatch and other new devices are in fact coming, or if they are just ideas that are being researched at this point. (There is also an English version of the document but the G-smart products are not mentioned in it like the Japanese version.)

Given that Casio and G-Shock seem to be running in overdrive lately, it’s not surprising that a G-Shock smartwatch is in the works. We’d be surprised if such a watch wasn’t being developed. G-Shock has carved out a great niche for itself over its 35-year history and has continued to explore new markets, but there are other lucrative product categories that other manufacturers (such as Garmin and Fitbit) dominate. We’ve seen recent G-Shock models such as the step tracking GBA-800 and GDA-800 from the G-SQUAD line come closer to competing with such companies, and we’ve seen G-Shock watches getting smarter with features like Bluetooth Mobile Link and GPS Tracking, but there are still many categories that G-Shock does not directly compete in. G-Shock’s reputation, along with its R&D and manufacturing abilities, should give it a fighting chance in these markets. If or when such a foray takes place, the world is sure to take notice.

Price Reduction for Casio WSD-F10 Smart Outdoor Watch
Disclosure: G-Central is independently managed by fans and supported by ads. We may earn a commission on purchases from our links to Amazon, eBay, and Reeds Jewelers.

I hope they make the Bluetooth/multi-band function standard in all watches, instead of just multi-band.

Just update the GPR-B1000 Rangeman with smartwatch features:
– Vibration alert
– notifications for calls, calender, email, messenger….
– weather app like on Garmin
– of course Google Map companion
– keep the black and white LCD for great visibility (The WSD-F10 and F20 are super bad in the sun)

The negative screen on the GPR B1000 purpose is to save power.

Casio are doomed to fail if they attempt to compete with “regular” smartwatches like those from Apple or Samsung. What they need to do is carve out their own niche, like Suunto or Garmin have. Easier said than done, since those two brands do a better job than Casio within the niches they specialize in. Personally, I’d rather see them refine their feature watches with improved sensor accuracy, alti/baro-lock, sleeker form factor, sturdier build, clearer/brighter displays, better typography, more efficient solar charging, and GPS time sync as backup to multi-band (forget Bluetooth, since that needs a phone and a survival watch should be autonomous).

I suspect that isn’t technically possible while maintaining GPS functionality. I would be interested to know how much energy is consumed using the GPS for one hour, and the size of solar panel (say in bright sunlight 8 hours per day) necessary to keep up with such demand. If anyone has an answer for the first part or wants to some back-of-the-envelope calculations for the second, that would be cool.

Should G-Shock launch a true smartwatch, then it would be a true “man’s” watch and by far the most rugged on the market. I own 4 G-Shock’s right now, the only thing I trust to wear to work, without any concerns of it getting damaged. Rugged and durable are key here, that in conjunction with smartwatch tech would be the ultimate tool for a guy! Personally I think it is inevitable, I will continue to be a G-Shock owner, and will buy one when it comes out. Can’t frickin wait!

I would love a g-shock gba 800 adding the functions of solar charging, gps and distance sampling. Only with that would I be happy.