The most expensive non-limited edition G-Shock watch is the MRG-G2000CB-1A (list price $3,700 USD) featuring a titanium case and DLC coating.

2015: The MRG-G1000RT-1A is getting a U.S.A. release in September and according to Casio will be available at select jewelers, the G-Shock website, and the G-Shock Soho Store. The list price is $6,000 making it the most expensive official G-Shock watch ever released for sale. The Yamagata-produced watch is made with the Titanium 64 alloy which is seven times harder than pure titanium.

The MRG-G1000RT-1A is a Baselworld 2015 limited edition and its official American name is (get ready) The G-Shock MR-G GPS Atomic Solar Hybrid Basel Special Limited Edition MRGG1000RT-1A. Some of its unique features include gold accents on the face, gold front screws and crown, a “Japan Blu” DLC (diamond-like carbon) coating on the case and bands, and a recrystalized bezel that is made in the style of the “nie pattern” of Japanese swords. This rich finish is considered the pinnacle of Japanese craftmanship and is said to reflect a unique glow in the light. Standard features of the MRG-G1000 include GPS Hybrid Multi-Band 6 worldwide timekeeping, Tough Solar, anti-glare sapphire crystal, latitude indicator, world time, LED Super Illuminator, daily alarm, auto calendar, 1/20 second stopwatch (24 minutes), countdown timer (24 hour), and day/date display.

Reports out of Baselworld stated that the production run was limited to 100. 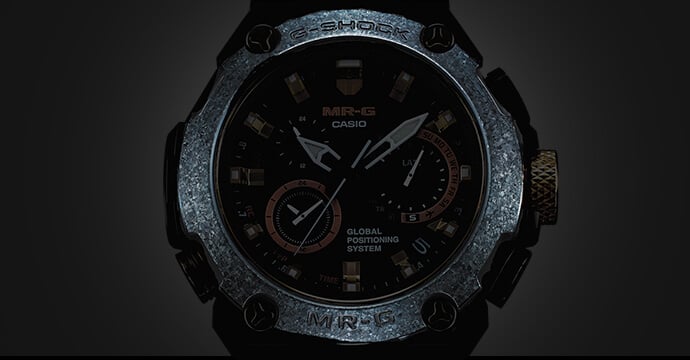 G-Shock MRG-G2000GA-1A with Gassan Sword Finish
Disclosure: G-Central is managed by fans and supported by ads. We may earn a commission on purchases from our links to Amazon, eBay, and Reeds Jewelers. Please follow your country's official G-Shock site for additional release information.