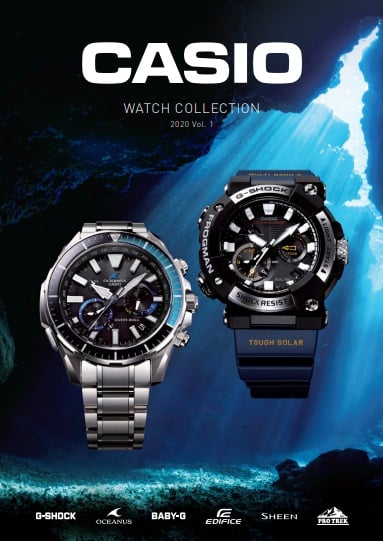 Casio released the “Casio Watch Collection 2020 Vol. 1” catalog online at Casio.jp in Japan. While there are no watches listed that we don’t already know about, there are some takeaways that might be of interest to fans.

The cover features the Oceanus OCW-P2000, the first-ever ISO “Diver’s 200M” Oceanus watch, and the G-Shock Frogman GWF-A1000, the first-ever Frogman with an analog display. Some people bemoan the Frogman’s change to analog, but the catalog also features the GWF-D1000B-1JF and GWF-1000-1JF, so these digital models are still part of the active lineup, at least in Japan. The GWF-D1000 and GWF-1000 are apparently not being distributed in the West anymore, but at least they will still be available as imports.

The GWN-Q1000A-1AJF and GWN-1000B-1BJF are also still listed. These Gulfmaster models seem to be limited to Japan now, but you might find them, along with the digital Frogman models, at official G-Shock stores in some other countries.

The popular GA-2100-1AJF, GA-2100-1A1JF, and GA-2100-4AJF from 2019 are listed in a section featuring other well-established models. The GA-2100-1A1 is still very difficult to find at official retailers. There was a small restocking in April and May at a few places, but we are still waiting for a larger and wider restock.

Notable watches that are missing from the catalog include the top-of-the-line MR-G series and the beloved GW-5000-1AJF. We wouldn’t read too much into that, as the GW-5000-1AJF was missing from previous catalogs as well, but it is still an active model according to the website.

The catalog also includes Casio’s other brands and watches, including Baby-G and G-MS.

All G-Shock Frogman GWF-A1000 models discontinued (Update: Five models are in active status again)
Disclosure: G-Central is independently managed by fans and supported by ads. We may earn a commission on purchases from our links to Amazon, eBay, and Reeds Jewelers.