G-Shock DW-5600 with EL Backlight: the best choice when you’re hiding in a box. 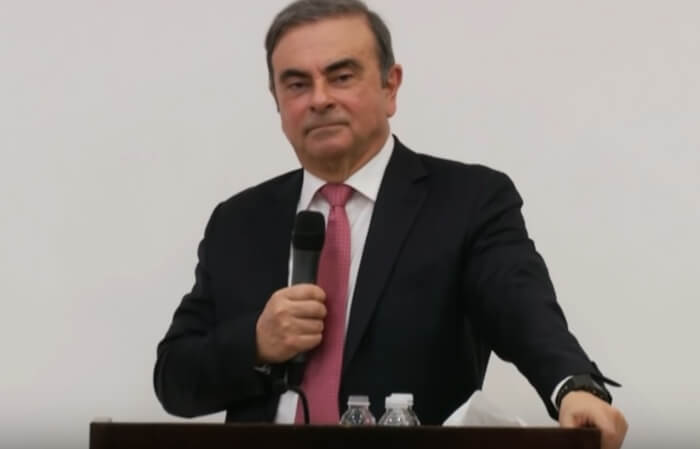 We don’t condone criminal activity and make no presumptions about the subject’s guilt, innocence, or justification for his actions, but one of the biggest public G-Shock sightings recently occurred at former Nissan CEO and chairman Carlos Ghosn’s press conference in Lebanon on January 8, 2020, in which he professed his innocence and fear of an unfair trial for the financial crimes he was arrested for. Ghosn was seen wearing a Casio G-Shock DW-5600BBN-1 during the press conference. This is a blackout model featuring the classic square case with a Cordura nylon band and a reverse LCD display.

Ghosn was never seen wearing a G-Shock before the press conference. It’s likely that he chose (or was given) the watch to use for his escape from Tokyo to Beirut, which reportedly involved fifteen people helping him, including a former U.S. Green Beret. The escape reportedly involved breaking his house arrest, catching bullet trains to Osaka, and then hiding in an audio equipment case and being boarded onto a Turkish charter jet. The DW-5600 would be a lightweight, comfortable watch in such a situation, and the EL backlight would have been useful while hiding in the dark box. But why was he still wearing the watch a week later, with a suit, at the press conference? He’s also been seen wearing it in during media interviews, and it’s possible that he prefers to use the watch during these times to keep track of his appointments, or perhaps like so many other people, he just grew to like it. (The cynical part of us says maybe it’s an attempt to avoid appearing like an evil rich supervillian.)

Reaction to The Time Teller’s “10 Things I Wish I Knew BEFORE Buying A G-Shock!”

Photos and Video: G-Shock 35th Anniversary in New York City
Disclosure: G-Central is managed by fans and supported by ads. We may earn a commission on purchases from our links to Amazon, eBay, and Reeds Jewelers. Please follow your country's official G-Shock site for additional release information.

If I had to guess I would say it was given to him during his escape, he wears it because he hasn’t had the time to get a dressier one. Even he hasn’t had time to get a taylored suit. It’s pretty small (he can’t close the jacket, he probably gained weight from being in a small cell with limited exercise). Also he hasn’t dyed his grey hair like he used to. And secondly, he wears it because he doesn’t want to rely on a cell phone in case he’s being monitored. Plus a black watch doesn’t look too bad, it’s fairly neutral.

Why is he still wearing a G-Shock?

Because, whether he’s a criminal or not, he’s got good taste in watches!! 😉

Em… he should’ve worn one of the Nissan’s collaboration models… lol!

I think this is the most likely answer

The cynical part of us says maybe it’s an attempt to avoid appearing like an evil rich supervillian.

It’s like how that rapper wore a G-Shock during some court case to prove he was bankrupt or something. Same theory. Ghosn’s as slimy as most rich people. Only reason he got caught is because he pissed off someone slimier (and probably richer) than him in Japan, so he runs and blames the system and whatnot, like every other slimy person in history ever.