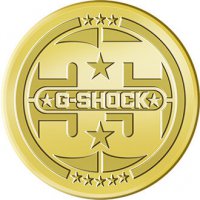 Casio launched a special website for the G-Shock 35th Anniversary at http://world.g-shock.com/35th/en/ which will be the go-to place for all anniversary information.

The site also reveals the G-Shock 35th Anniversary logo designed by Eric Haze which will adorn the case backs of future limited edition watches. The logo has three stars on the top and five on the bottom to signify three decades and five years.

Update: The 35th Anniversary Big Bang Black Collection has been added to the site.