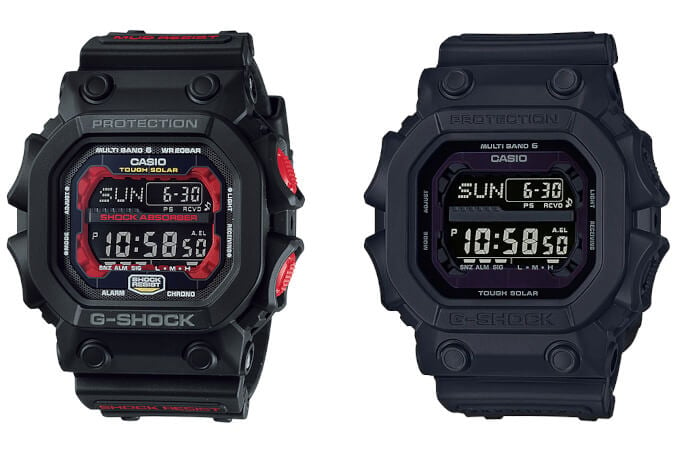 These two “King” models, as they are affectionally called by fans, are some of the largest digital-display G-Shocks available with dimensions of 55.5 x 53.6 x 17.5 millimeters. According to G-Shock, the “X” stands for “extra,” and these models offer even more shock protection than other digital models. The GXW-56 has a heavily protected display and enhanced module protection, with a two-layer urethane bezel and Alpha Gel shock absorbers at four points inside the watch. It also has a dustproof and mudproof structure.

Update: Both models are now listed at casio-europe.com.

(In the U.S., the GX56BB-1 ($150) is still an active model. The GX-56 has also been a popular series for collaborations in Singapore. For a model with a non-inverted LCD display, there is the GXW-56-1BJF from Japan.)

G-Shock GX-56BB-1: GX-56 returns with stealth black ‘King’
Disclosure: G-Central is managed by fans and supported by ads. We may earn a commission on purchases from our links to Amazon, eBay, and Reeds Jewelers. Please follow your country's official G-Shock site for additional release information.