It appears that the black titanium G-Shock MRGG1000B-1A will finally be getting a proper U.S. release in 2015. G-Shock U.S. has the watch featured on its homepage and has a promotional MR-G page up. The MRGG1000B-1A was actually available in limited quantities in December 2014 at the G-Shock Soho Store and in January 2015, but it never received an official announcement from Casio and did not appear on the G-Shock website until now. It was previously featured on the G-Shock Japan and Casio International websites and has been available as an import.

The new MR-G page emphasizes the MRGG1000’s top of the line status as the supreme G-Shock. It describes how the titanium used for the body and band is heated in an oxygen and nitrogen mixture to create a hard layer on the surface that is scratch-resistant and harder than pure titanium. The MR-G also has a sapphire crystal with anti-reflective coating for better scratch resistance than the usual mineral glass. Also noted is the watch’s light weight and comfortable titanium build, its uniquely refined, polished finish and its ability to sync the time with Multi-Band 6 or GPS signals anywhere in the world. 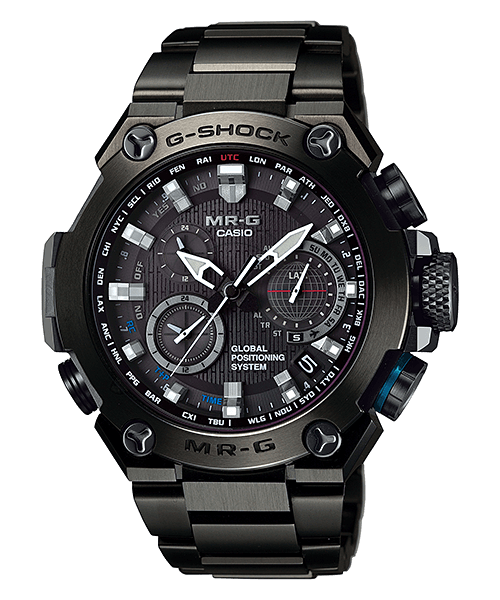 G-Shock MRG-B5000BA-1: A peak square inspired by blue ink
Disclosure: G-Central is independently managed by fans and supported by ads. We may earn a commission on purchases from our links to Amazon, eBay, and Reeds Jewelers.