The GSG-100 and GWG-100 do not have any sensors like the other Mudmaster lines but they do have a superior lighting feature. The GSG-100 has full auto dual LED lights with a Neon Illuminator blacklight LED for the hands and markers and a Super Illuminator for the LCD displays.

As part of the Mudmaster family these watches are mud-resistant with a cylindrical button guard structure that protects the buttons from impact and keeps out mud, dust, and sand. The look of the watch is inspired by disaster relief vehicles and tools and the simple, rugged design will likely appeal to those who work outdoors in demanding jobs. 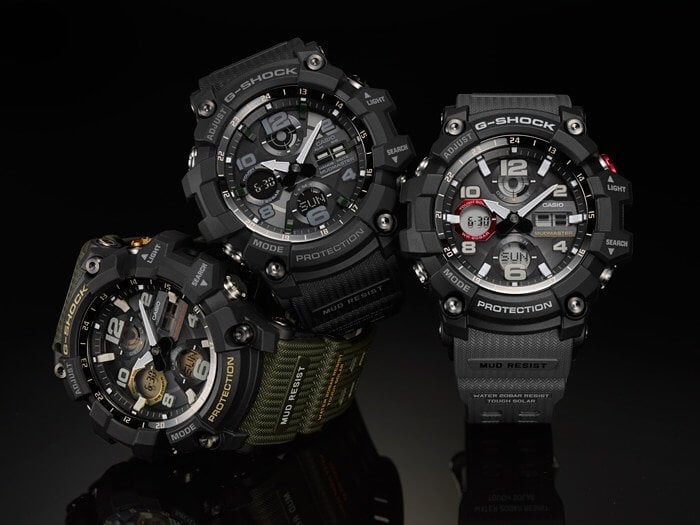 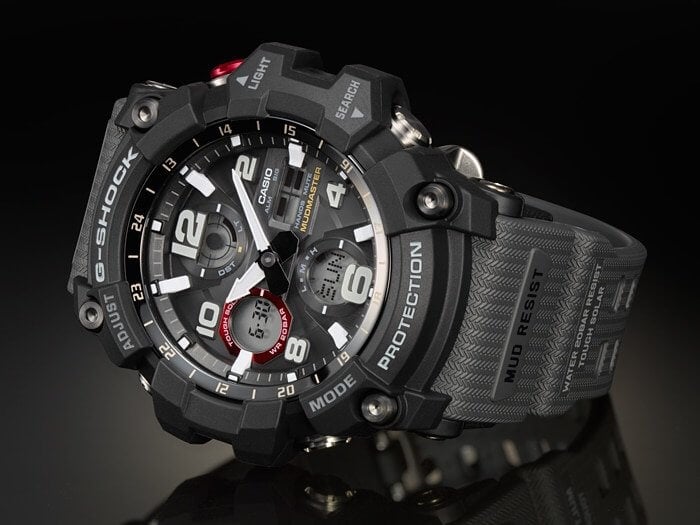 Baby-G G-MS MSG-S600 with Tough Solar Power
Disclosure: G-Central is independently managed by fans and supported by ads. We may earn a commission on purchases from our links to Amazon, eBay, and Reeds Jewelers.

Can you tell me which version will be sold in Italy? GWG or GSG or both?

Not sure right now, but Europe and Italy did get the G-STEEL GST-WXXX models with Multi-Band 6 so I think it might be the GWG-100.

Europe is getting the GWG-100 series.

will GWG-100 series will be available in ksa?

I talked to ShopCasio yesterday. They do not have it in stock yet. Maybe within 10 days.

I have a new GSG 100, in outside temperature below 0 I get condensation inside the glass, is this normal

It’s not normal but not unheard of. There is probably some moisture trapped in the watch.

Are these GSG-100s available in the US? I can only find them at stores online I’ve never heard of. Do you know where I can get one? I was going to get the gg 100 but I like the solar power on these.

The other version, the GWG-100 (with Tough Solar and Multi-Band 6), was actually released in the U.S. and was available from Casio and Amazon for a brief time but it’s sold out now. I don’t know of any authorized dealers that have any GSG-100 or GWG-100 models in the U.S. now, but prices for the GSG-100 are good on eBay. You can buy the 2-year protection plan from SquareTrade if you are concerned about a lack of warranty.

Thanks, I found some on eBay. I think the gwg is just a little too big for me. In your opinion which one is a better watch, the gsg 100 or the non solar gg 1000?

The GWG-100 is different from the GWG-1000. It is the same size as the GSG-100. It’s basically the same watch but with Multi-Band 6 added. I try to buy solar watches when it’s possible but I also like having a compass, so that would be a tough choice for me. I think the GSG-100 is nice but I would like it much more if it had a compass. The GG1000 seems to be more popular in America. It depends on your needs and preferences. If you’re not going to use the Twin Sensor at all then I would suggest the GSG-100.
GWG-100: https://www.g-central.com/g-shock-gwg-100-mudmaster-with-tough-solar-multi-band-6/

Thanks. I went with the GSG-100 for now. Great site. Really helpful, thanks

How many hours does it take to have a fully charged GSG-100?

It depends, please see the chart in the manual.
https://support.casio.com/en/manual/manualsearch.php?cid=009&MODULE=5562