The GG-1000 is a battery-powered watch (not Tough Solar) with a Twin Sensor (compass and thermometer). The bezel has a similar design as the GWG-1000 but does not have a front-facing backlight button. The face has two LCD display areas and a prominent mode indicator dial. Like the GWG-1000 the GG-1000 is resistant to mud and dust. Unlike the GWG-1000’s sapphire crystal, the GG-1000 has a mineral glass display. 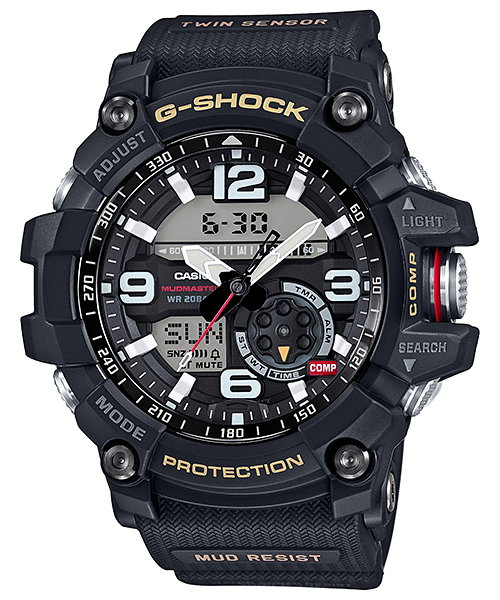 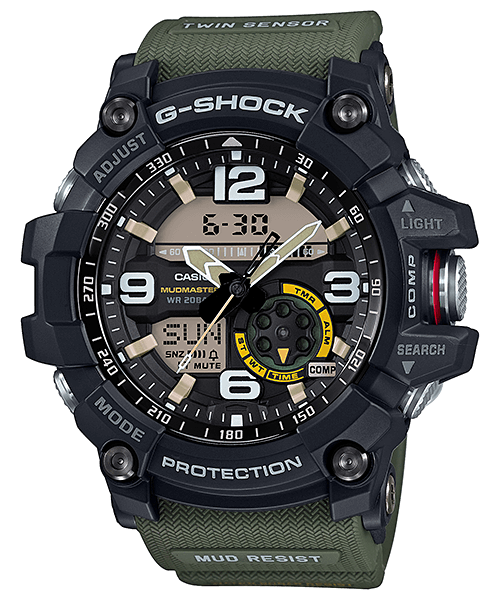 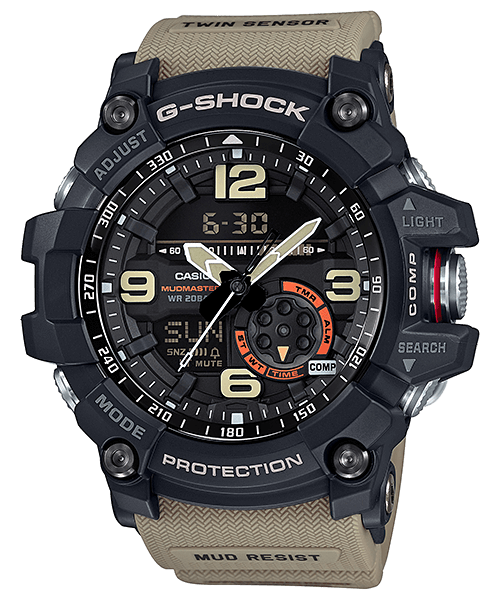 With gold dial ring and markers, released July 2016 as part of the Master of G Twin Sensor Black and Gold Series. 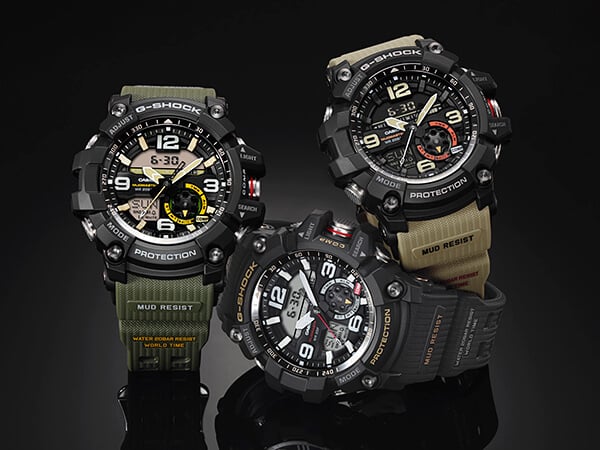 Mudmaster GWG-2000 vs. GWG-1000: Same same but different
Disclosure: G-Central is managed by fans and supported by ads. We may earn a commission on purchases from our links to Amazon, eBay, and Reeds Jewelers.

There will be a gapping hole on the band near the bottom where the gwg1000 button be.

What happen after two years and the batteries run out,
Is there a way that the battery can be charged or would have to replace it with a new battery?

The battery on this model must be replaced. It is not rechargeable.

Question….I live in the US and want this watch with the black band. I don’t want the gold face version. Is it better/safer to order the green version and a black replacement band, or just buy an import from Japan (via Amazon)? Any idea why Casio only released the green and tan versions in the US?

Yeah personally I would probably just get it from Japan. I’m not sure why Casio chooses to release some models and not others in the U.S.

Hi,
Is there a soft rubber strap that will interchange with the factory harder strap on the GG-1000?
Thank You,
David

Doespecially the GG1000-1A5 have atomic timekeeping, or do you set the time manually? Thanks.

No, this model does not have Multi-Band 6 atomic timekeeping.

Where can I find the black replacement band for the gg-1000 1a? I can’t seem to find it

Hello
I need to know about possible g shock mudmaster fake models…
I’ve seen this one that has a neon pink band on the inside..
I’m thinking it’s an older model and it’s for females. The quality is really good though.
Please reply as soon as possible.
Thanks!

Hi
I supposed the watch has time in digital format. Does this digital time sync up with the analog time as indicated by the hour minute hands automatically?

Yes, the analog hands are linked to the digital time.

hi. why some of the time my neon light for GG1000 not bright enought

Is the battery charged fully?

How long do you think the thermometer needs until it read the ambient temperature when you move from one place to another? Got the GG-1035 and it takes quite a while to go from 80-ish to 45-ish F

The GG-1000 manual says it can take 20-30 minutes after removing it from your wrist so I would assume it would be similar if changing environments.

I have g-shock-mudmaster-gg-1000 with black belt. I now want to replace the black belt with Green belt.
Can I do it ? from where I can order green belt ?