Japanese fan blog Great G-Shock World reported that the G-Shock Rangeman GPR-B1000-1BJR is no longer in production. This has also been confirmed by the old G-Shock Japan (g-shock.jp) website (which despite our earlier report, is still up and active if visited at certain URLs). As there are no other GPR-B1000 models that remain in production, it appears that the GPR-B1000 series is being discontinued.

The GPR-B1000 was the first G-Shock watch with a GPS navigation function and the first with an advanced MIP LCD display (which would later be seen on other smart models like the GBD-H1000 and GBX-100). It’s not known if another Rangeman model will be introduced to take its place.

Perhaps the upcoming launch of the G-Shock GSW-H1000 Wear OS smartwatch with a similar price makes the GPR-B1000 a less attractive option now, but it does have other useful outdoor features like the Triple Sensor, sunrise/sunset time, tide and moon graphs, GPS time-syncing, and solar-assisted charging, along with deluxe exterior parts like a sapphire glass and carbon fiber insert band.

According to G-Shock Japan, the previous generation Rangeman GW-9400J-1JF and GW-9400BJ-1JF are still in production. In the U.S., the black GPRB1000-1 is still available at some retailers. 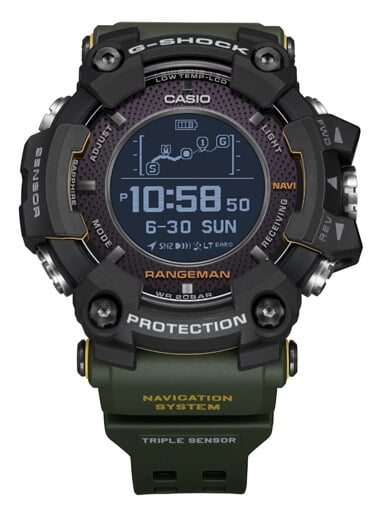 G-Shock GW-9400J-1BJF Rangeman Black Out
Disclosure: G-Central is independently managed by fans and supported by ads. We may earn a commission on purchases from our links to Amazon, eBay, and Reeds Jewelers.