Update: The G-Shock G-SQUAD GBD-H1000 with GPS and heart rate monitor was announced by Casio for an April 2020 release. The more affordable G-SQUAD GBD-100 was also revealed, featuring an accelerometer and smartphone notifications. 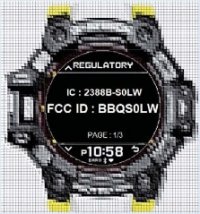 Spanish fan blog Zona Casio reported that the new G-Shock GBD-100 and GBD-H1000 will be joining the G-SQUAD fitness line possibly in spring or summer 2020. This appears to be confirmed by FCC registration information found on various sites.

Zona Casio reported that in addition to both models being equipped with Bluetooth, the GBD-H1000 will have a heart rate monitor and a barometer. They also said that the GBD-H1000 possibly has Tough Solar power, while the GBD-100 probably does not. The displays of both models appear to be a dot-matrix type like the GPR-B1000 Rangeman, and the bezels resemble that model as well.