Prototype photos of the upcoming G-Shock MRG-B5000 from a Taiwanese National Communication Commission device application have been discovered online. It has a digital LCD display, and this will be the first MR-G watch with a full digital display since 1999. It should be noted that the watch in the photos appears to be a prototype in a very rough and unfinished state, and the final product will probably look a lot different (and better).

From the front view, the prototype looks almost identical to the GMW-B5000, but with an MR-G logo on the lower left face, in place of the “Water Resist 20Bar” label. The watch also has the “Titanium” label on the upper right face. The watch appears to be a lot thicker than the GMW-B5000 from the side view, and it appears to be around 18 millimeters thick. There is speculation that the reason for this thickness is that the watch has GPS time-syncing, like the MRG-G1000 and MRG-G2000. If that is the case, we would have to wonder why they didn’t go with “MRG-G5000,” and some of the technical data seems to support that it doesn’t have GPS timekeeping.

The case and band appear to be in a non-finished state. MR-G watches usually feature a diamond-like carbon (DLC) coating, and we expect that to be the case with the MRG-B5000. The DLC on G-Shock watches has traditionally been black, but there is a newly developed dark green DLC on the recent MRG-B2000BS-3A, so perhaps the MRG-B5000 will feature multiple shades of DLC. Great G-Shock World originally reported that the MRG-B5000 will be made of TranTixxii titanium and will have a multi-color style. (Update: There are rumors of two models coming, one silver and one black, featuring a new type of titanium and ranging in price from $3,700 to $4,200.)

GGW also recently reported that according to an unofficial source, the MRG-B5000 will be released in August or September 2021, which is a lot earlier than originally reported.

The MR-G series is the top of the line for G-Shock watches and celebrates its 25th anniversary in 2021. The MRG-B5000 will be positioned as the premier 5000 series square model.

View all the photos at fccid.io. 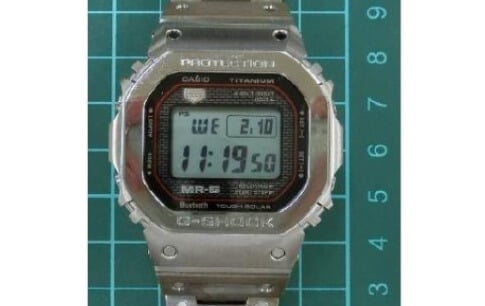 G-Shock GMW-B5000-1 Stainless Steel with Resin Band
Disclosure: G-Central is managed by fans and supported by ads. We may earn a commission on purchases from our links to Amazon, eBay, and Reeds Jewelers. Please follow your country's official G-Shock site for additional release information.