American oceanographer, engineer, and NASA astronaut Megan McArthur was spotted wearing a Casio Baby-G watch on the International Space Station. McArthur is part of SpaceX Crew-2, which has been docked at the ISS since April 24.

The watch is the translucent gray Baby-G BG169R-8B with a blue face. Like G-Shock watches, Baby-G watches feature full shock resistance, and the BG169R-8B has 200-meter water resistance, making it a popular choice for surfing and other intensive water sports. The similar BG169R-8 was worn by Blake Lively in the movie “The Shallows.”

The Baby-G watch can be seen on McArthur’s NASA Flickr album and Instagram account. In one video, she demonstrates how she washes her hair in space. McArthur has been conducting various experiments on the ISS, and the crew grew chili peppers in space for the first time. Crew-2 is planning to return to Earth in November.

NASA astronauts have been known to wear G-Shock watches in the past, with several models being officially certified by NASA for space flight. This is the first time we’ve seen an astronaut wearing a Baby-G watch. (Thanks to off.grider for the tip.) McArthur was also a crew member of STS-125, the fifth and final Space Shuttle mission to the Hubble Space Telescope. G-Shock U.S. released the DW5600NASA21 collaboration watch in April, to commemorate the 40th anniversary of the first Space Shuttle flight. 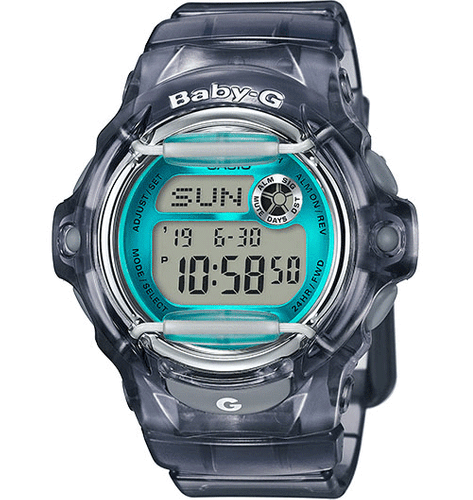 The wristwatches in “Turning Red” resemble Casio and Baby-G

Mary Quant x Baby-G 2 Watch for November 2017
Disclosure: G-Central is independently managed by fans and supported by ads. We may earn a commission on purchases from our links to Amazon, eBay, and Reeds Jewelers.