An all-new G-Shock GBA-900 model was discovered through an FCC equipment approval application. The watch is presumably a G-SQUAD fitness model and a successor to the analog-digital GBA-800, which features a step counter and Bluetooth smartphone link.

Based on the image of the case back layout included in the application, the watch is powered by the all-new Module 5641. It has an acceleration sensor for step counting, and the fact that this filing exists means that it will be equipped with Bluetooth connectivity. Based on the model name, it will be an analog-digital model like the GBA-800. It remains to be seen if it is a mid-size model like the GBA-800 and GBD-800. (As is usually the case, there is a short-term confidentiality request on the photos included in the application.)

Casio President and CEO Kazuhiro Kashio recently spoke of an upcoming watch co-developed by Asics that will be compatible with the Runkeeper app, and he identified the lack of compatibility with third-party fitness apps as a problem with previous G-SQUAD models. The watch he was referring to is most likely the GSR-H1000, but this also has us wondering if the GBA-900 with be compatible with Runkeeper as well. 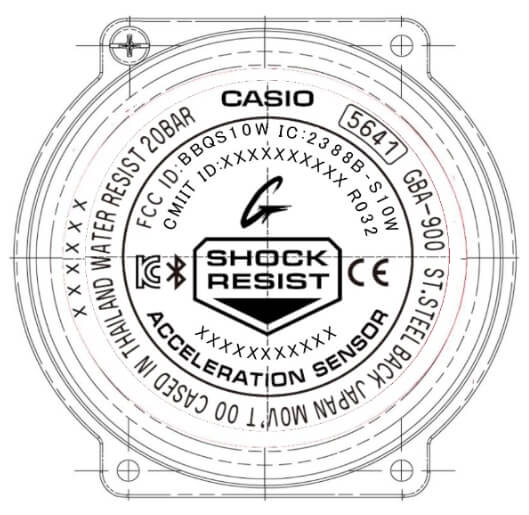