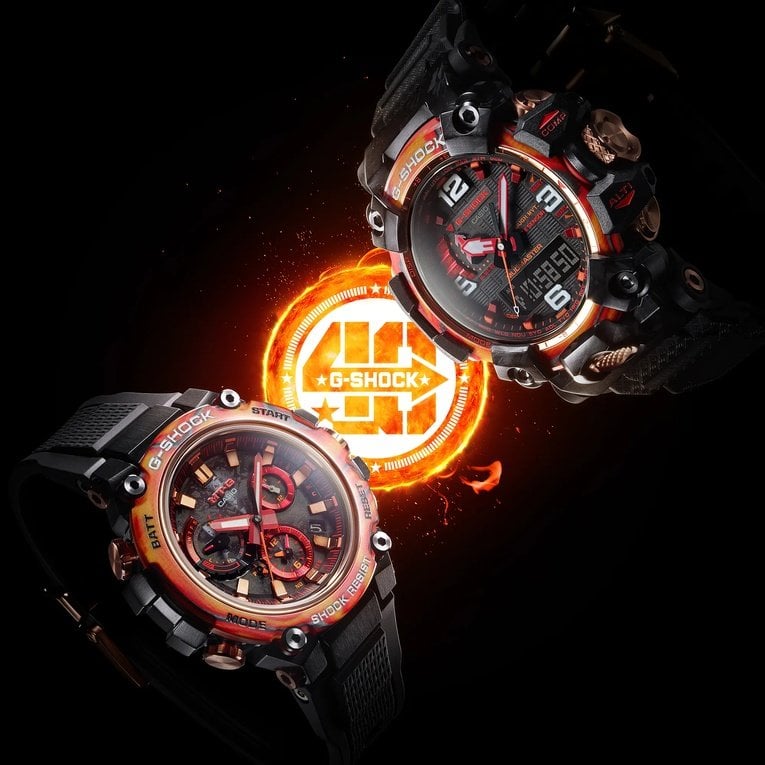 The Flare Red Series is the first limited edition series of the G-Shock 40th Anniversary and includes the Mudmaster GWG-2040FR-1A and MTG-B3000FR-1A. These flame-like models are inspired by the traditional black and red brand colors and have a solar flare theme with a multicolor carbon-insert bezel. The bezel is made of layers of carbon and glass fiber sheets that contain phosphorescent particles that glow in the dark. Due to this layered manufacturing process and the cutting of each bezel, each bezel is completely unique. The GWG-2040FR-1A is also made of phosphorescent epoxy mixed with its forged carbon exterior parts. The result is a black part that displays a random glow pattern in the dark (seen below left). 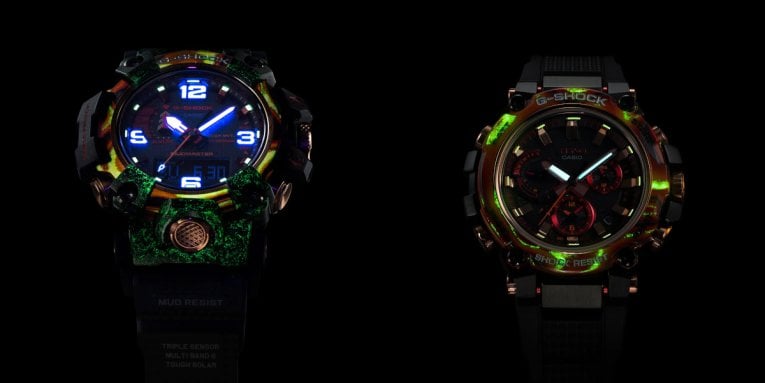 The case back of each watch has a black ion plating and is engraved with the 40th Anniversary logo designed by Eric Haze. Other enhancements include rose gold ion plated exterior parts and anniversary stainless steel band keepers with “Since 1983” and four stars to represent 40 years. G-Shock made its debut in 1983 and the 40th Anniversary is in 2023, but Casio usually releases some anniversary series early. 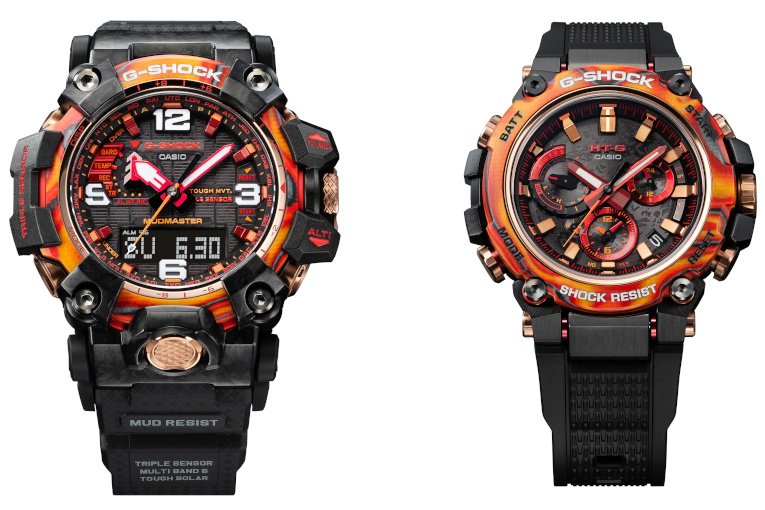 The GWG-2040FR-1A and MTG-B3000FR-1A are high-end models featuring Tough Solar power, Multi-Band 6 automatic radio time sync, and a sapphire crystal. The Mudmaster GWG-2040FR-1A is also mud-resistant and has the Triple Sensor (pressure: altimeter-barometer, compass, thermometer). The MTG-B3000FR-1A has Triple G Resist (protection against shock, centrifugal force, and vibration) and Bluetooth smartphone link. The GWG-2000 series with Carbon Core Guard made its debut in 2021 and is smaller and lighter than the GWG-1000. The MTG-B3000 series made its debut in May 2022 and is notable for its full analog style and thin size (12.1 millimeters). 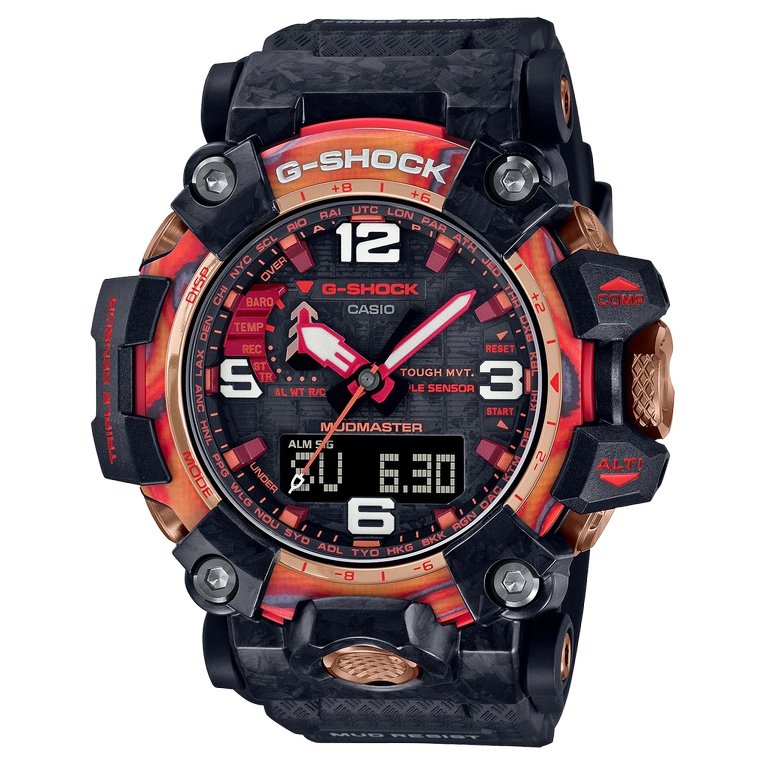 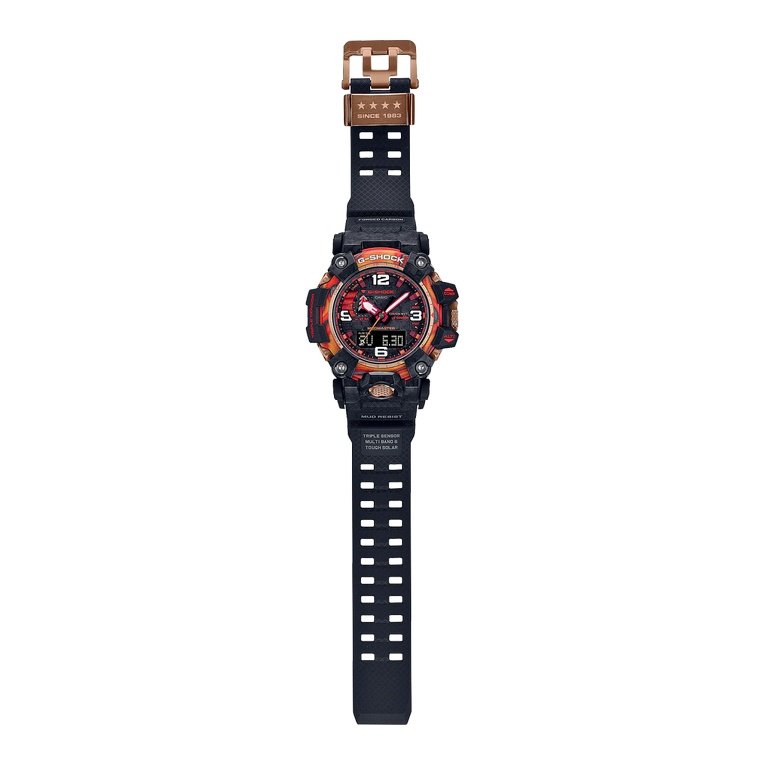 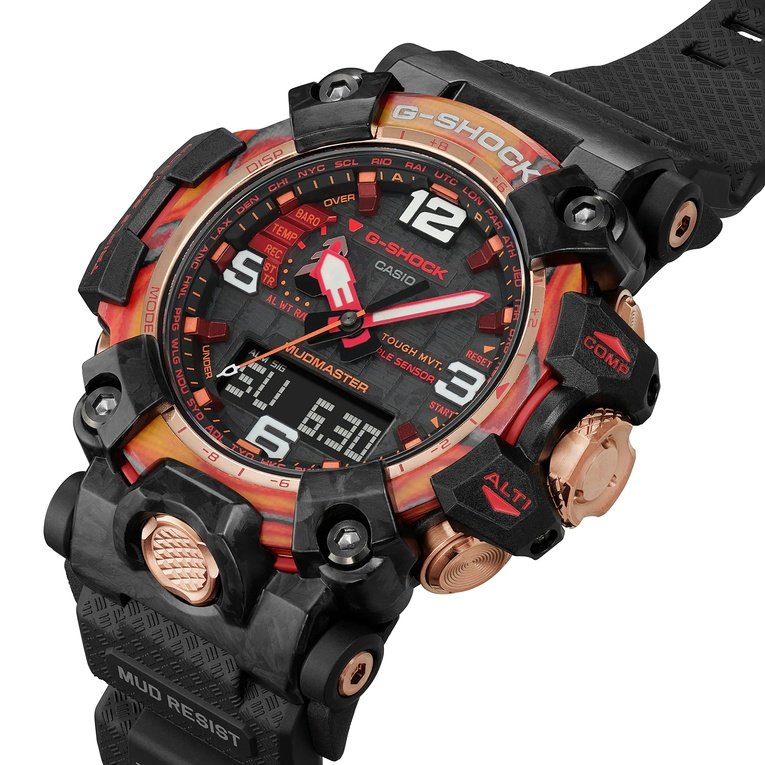 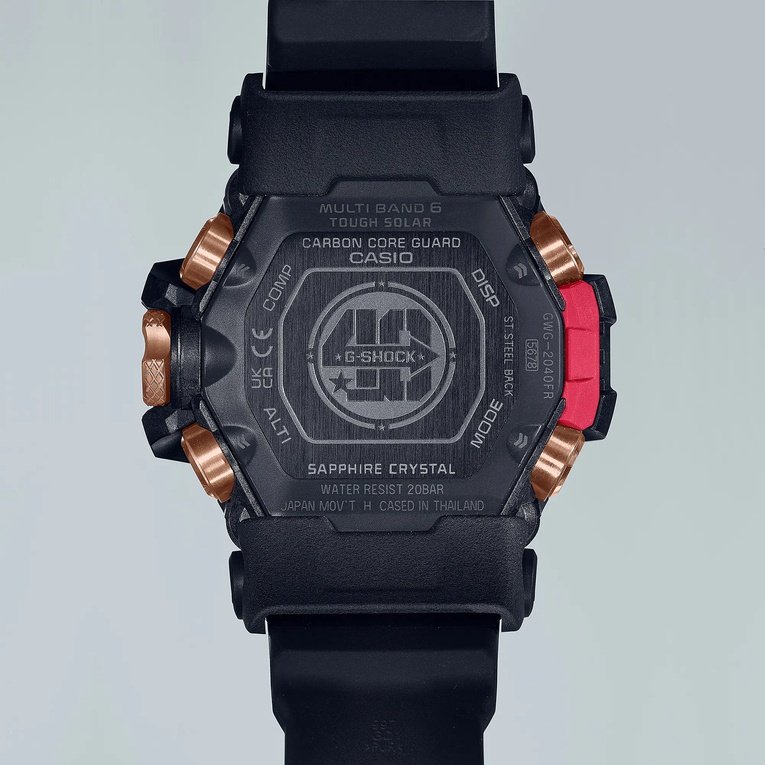 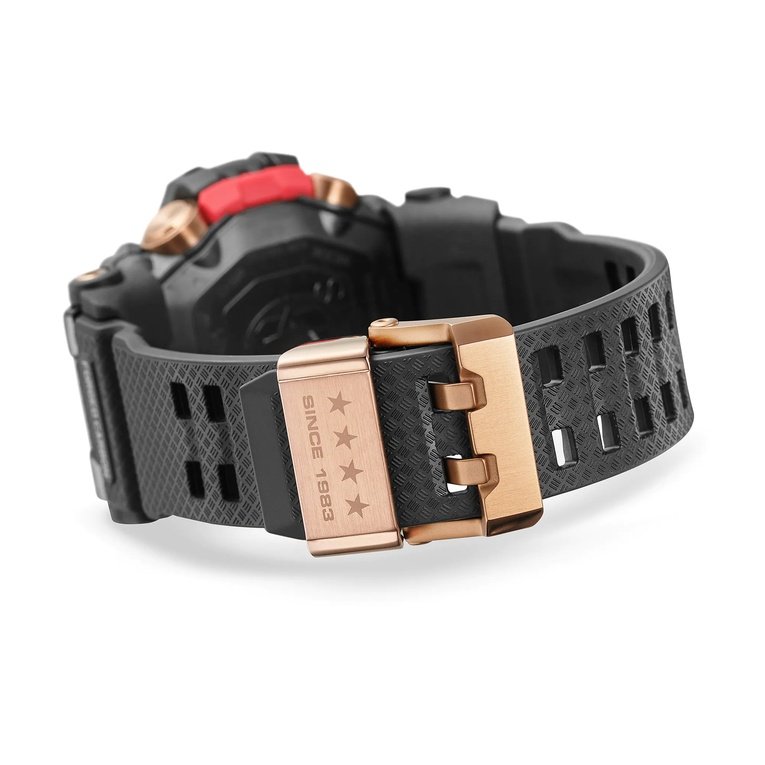 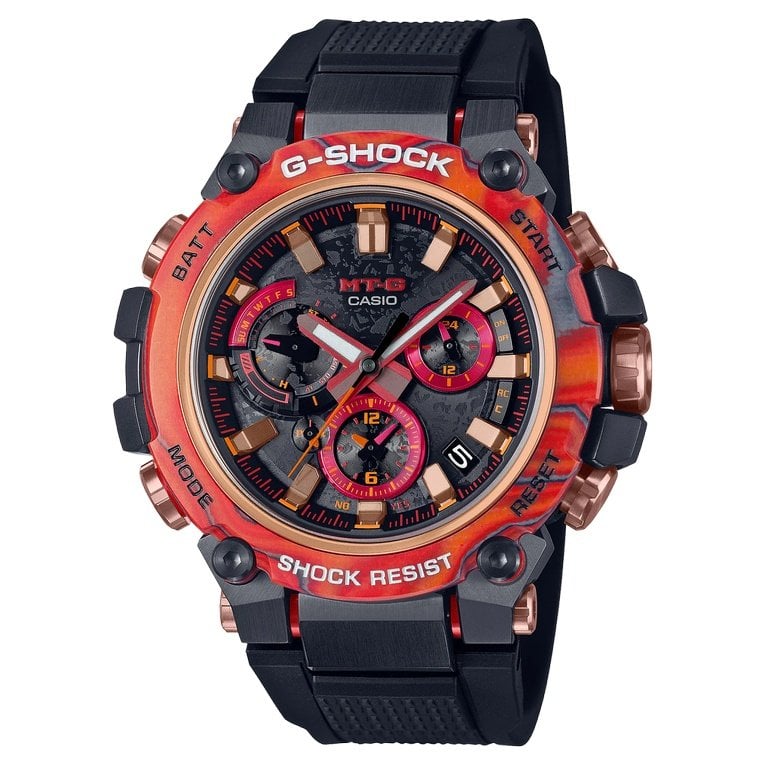 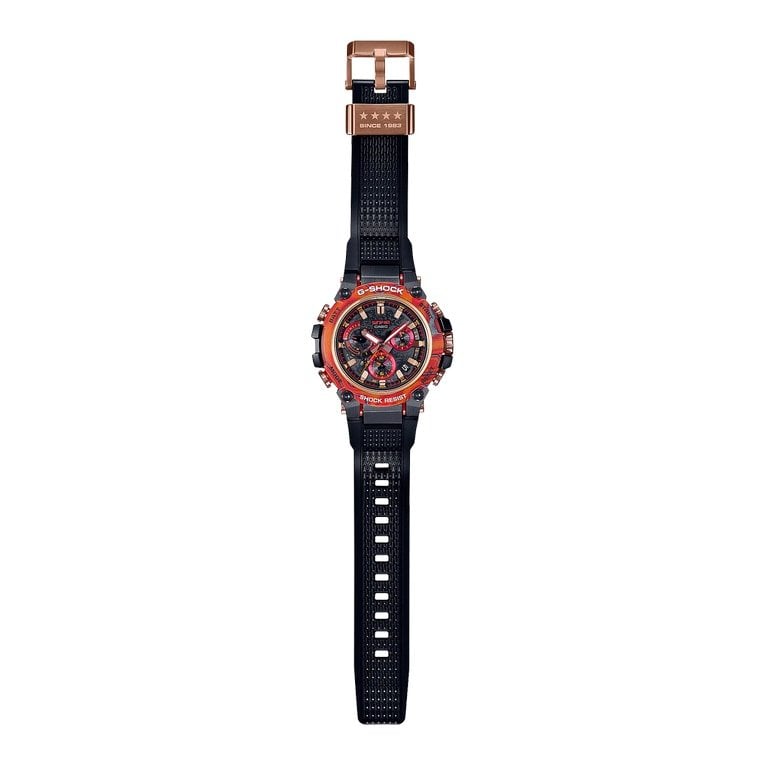 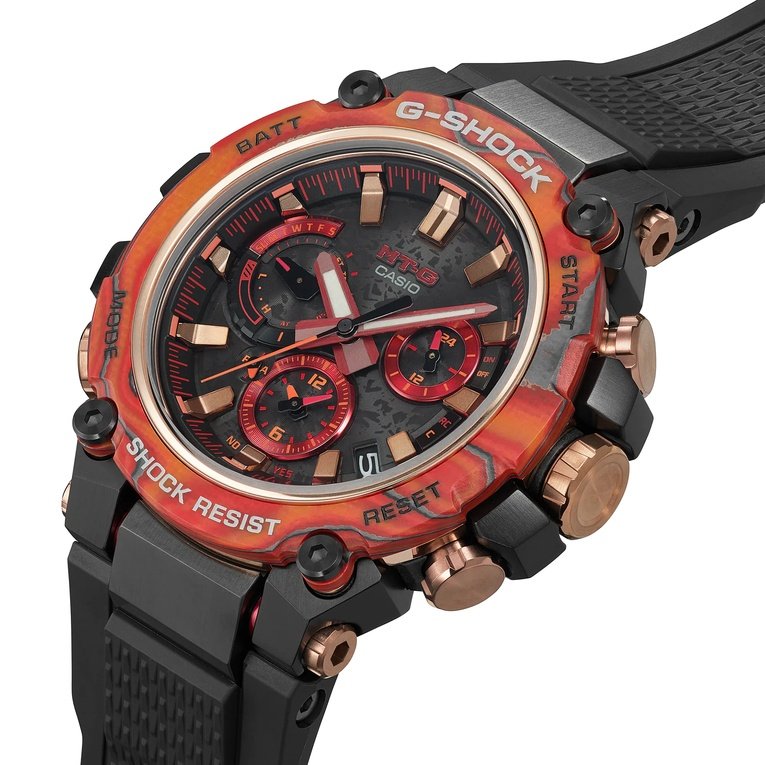 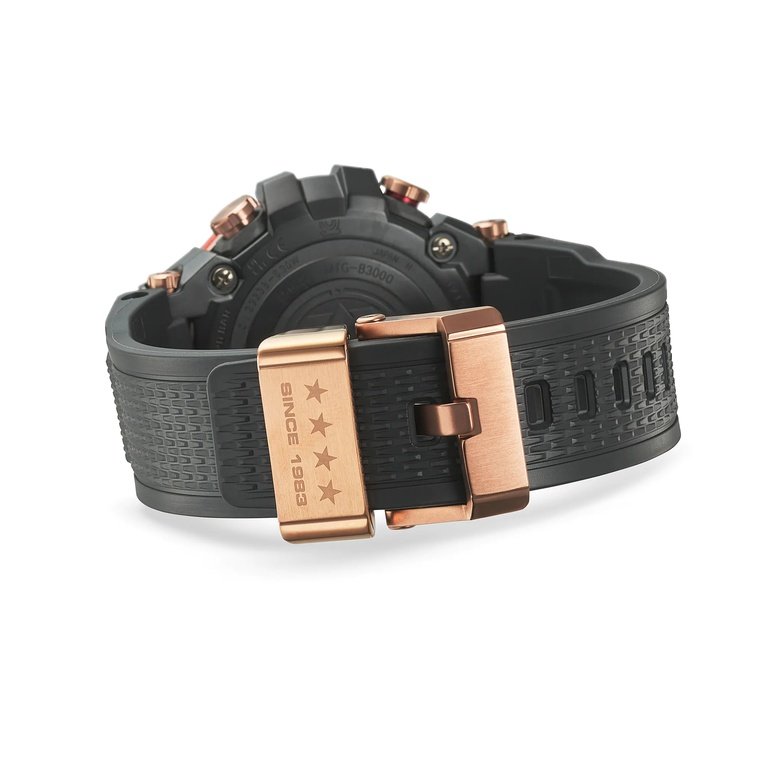 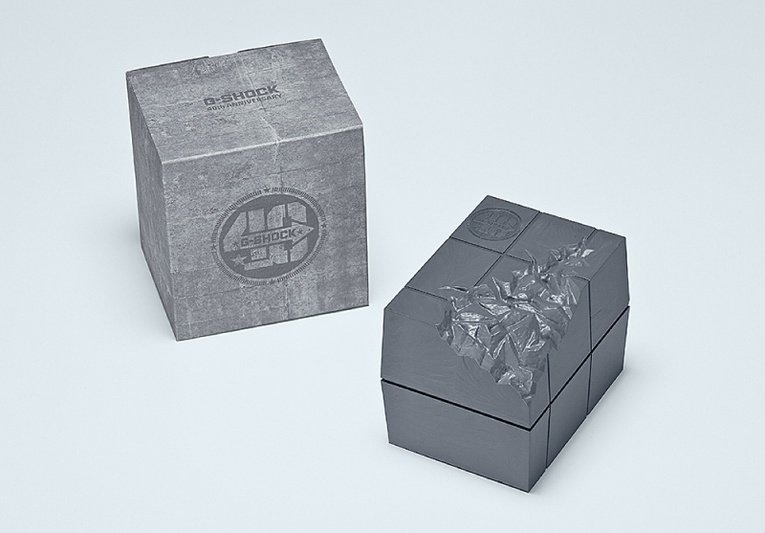 Every place I read about these hassn’t indicated how many they plan to make. Japanese site says nothing. US says limited edition. Nothing appears to be etched on the back regarding how many there are. Seems weird I’m the only one asking. Anyway, I love the Mudmaster and wish I knew if $1100 buys any exclusivity whatsoever to prop the value down the road. Patiently waiting for Casio to improve these modules on the MT-G. I get the 2nd time zone, but the 24 hour is a waste and a distraction.

I don’t think they will reveal the production number for these.

It could have been blowing smoke, but I saw “1983 pieces” somewhere and can’t find it now. Not sure if it said combined 1983 or what.

I love this kind of G-shock

I’m loving what I’m seeing so far for the 40th Anniversary collection. But I must satisfy the internet commenter’s incessant need to nitpick. In this case, it is the fact that the Mudmaster is not an entirely “Made in Japan” watch at a price point of $1,100. I realize Casio is probably only set up to manufacture the Mudmaster in Thailand, but, nevertheless, I was hoping there could have been an exception in this case.

Also, it looks like the Reeds affiliate link is broken. I would like G-Central to earn a commission as I’m still keen to scoop up the Mudmaster and perhaps the MT-G. Thank you.

Thank you, my family and I would appreciate that very much. The links are working for me. Are you using an ad blocker?

I must have missed your reply, hence the delay. It looks like it was the ad blocker, thanks for the heads-up.

Also, if you’re outside the U.S. or using a VPN you might get blocked by Reeds.

No VPN and I am in the U.S., looks like the ad blocker was the issue. Thanks again.