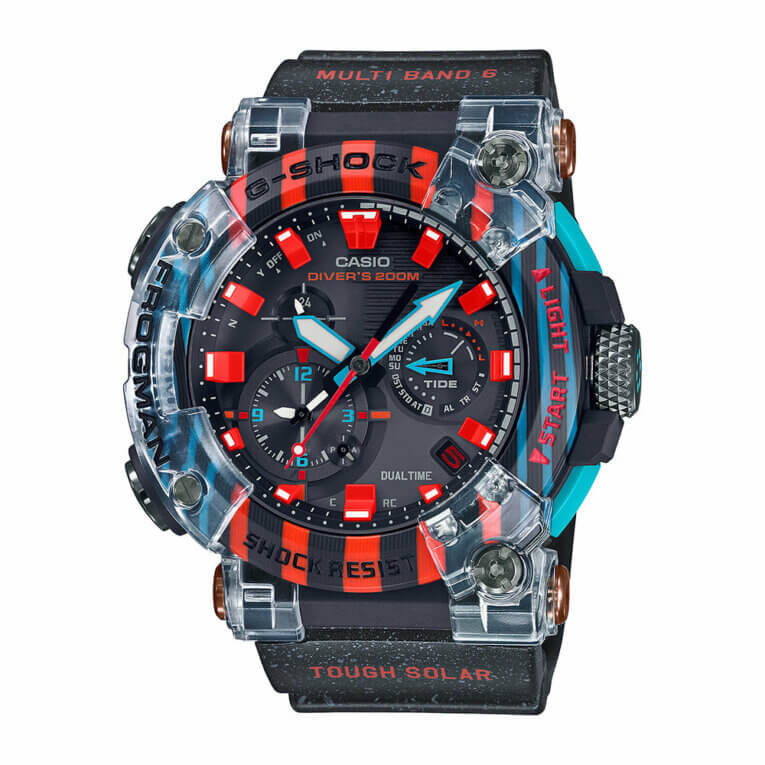 The upcoming limited edition G-Shock Frogman GWF-A1000APF-1A, based on the South American poison dart frog that inhabits the Amazon, was recently revealed at the G-Shock Premium Night event in Japan. The colorful design with translucent resin bezel parts is reminiscent of the GWF-A1000BRT-1A based on the Borneo rainbow toad, but the GWF-A1000APF-1A has a multi-color bezel made of carbon rather than stainless steel.

The bezel is made from laminated carbon and glass fiber, and the pattern of blue and red colors on each individual bezel is unique. The band is speckled with polarized paint that changes hues depending on the angle of view. The watch also has an exclusive case back design with a Frogman character based on the poison dart frog and a tribute to the 30th Anniversary of the Frogman diving line that made its debut in 1993. The base model is the GWF-A1000, which is the first Frogman series with an analog display and a carbon monocoque case. According to morgan_gshock (instagram.com), this may be the last GWF-A1000 model to be released.

In Japan, the GWF-A1000APF-1AJR will be released in January 2023 with a tax-included price of 137,500 yen. The release status for other countries is currently unknown, but it’s likely to get a wider release.

G-Shock Frogman GWF-D1000B-1LTD 35th Anniversary Collector’s Set with Hard Case & Diving Knife (Europe)
Disclosure: G-Central is managed by fans and supported by ads. We may earn a commission on purchases from our links to Amazon, eBay, and Reeds Jewelers. Please follow your country's official G-Shock site for additional release information.

I rarely, very rarely, get into themes and stuff. It just doesn’t interest me beyond the specs and appeal of the watch as it is. This, however, is amusing and appealing. I like the idea behind it.