The old Product Search page at G-Shock Japan is still up at g-shock.jp/products/finder, but it has not been updated since March 2022. Until then, new products were still being added there along with the new site at gshock.casio.com/jp. The old Product Search page is known as an excellent resource to find information on older and discontinued models with the “end of production” status. Along with no longer featuring new products, it also appears that the old site has stopped updating the discontinued status of old models.

The new site also has some discontinued models listed, but not all of them. The old Product Search site essentially served as a back catalog of all major G-Shock releases in Japan dating back to the first G-Shock models from 1983, and it is the only official Casio G-Shock site with this information. We hope that it continues to remain online as a reference tool, but it is unfortunate that it is not being updated. The best alternative is the unofficial fan site shockbase.org, which maintains a similar database and also contains international and collaborative models that are not listed on the Japan site.

Speaking of discontinued models, Japanese fan site Great G-Shock World recently pointed out that a G-Shock model that was previously listed as discontinued, the clear skeleton GA-2100SKE-7AJF from February 2021, is now available in Japan. It is also available throughout Asia, the U.S., and Europe. We also noticed that the GA2100SKE-7A has been regularly available in the U.S. for a while, and it never really seemed to be discontinued there despite the “end of production” status in Japan. 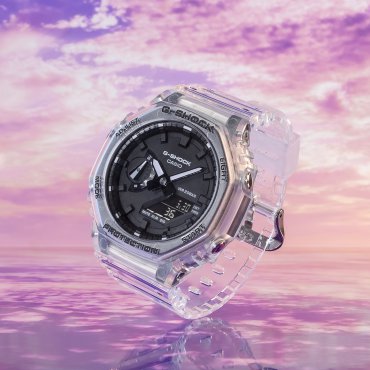 Gundam Fan Club x G-Shock DW-6900 Amuro Ray Model
Disclosure: G-Central is managed by fans and supported by ads. We may earn a commission on purchases from our links to Amazon, eBay, and Reeds Jewelers. Please follow your country's official G-Shock site for additional release information.

I have copied their db in 2018, search is available from 1983 to 2018-10 on my shock-resistant.ru. But this official japanese db, a lot of models from not-japanese-markets are not present in this db.

Thanks for the props guys 🙂