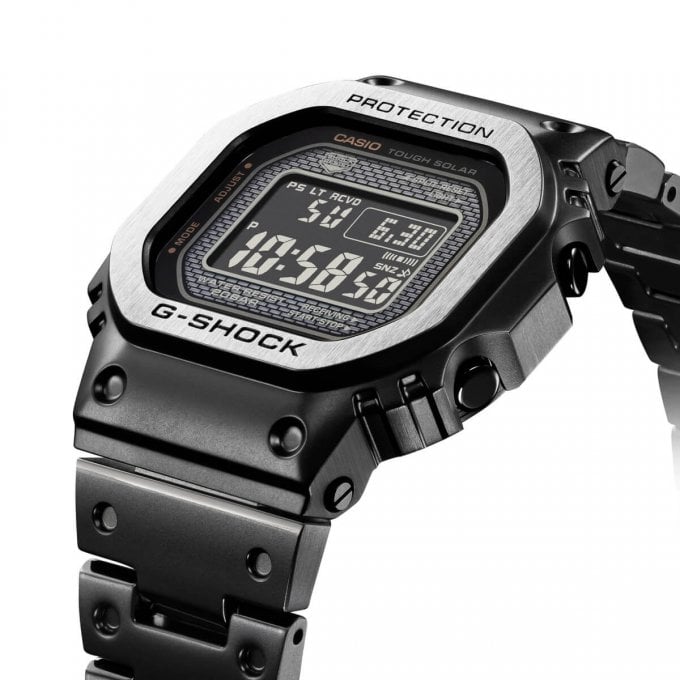 Update: The matte black stainless steel G-Shock GMW-B5000MB-1 was officially announced in Japan and Asia for March 2022. In Japan, the GMW-B5000MB-1JF will be 77,000 yen (tax-included). The watch has a unique matte texture which is the result of a honing finish applied before the black ion plating. The top surface of the bezel uses a new type of processing that involves a hairline finish polishing to reveal the stainless steel, giving it a contrasting silver gleam. The sides of the bezel and band have a hairline finish, and the buttons and screws have a mirror finish. The “MB” stands for “Multi-Finish Black.” Casio describes the ion plating as “one shade lighter than conventional black.” The watch measures 49.3 x 43.2 x 13 millimeters and weighs 167 grams.

The “JF” in the Japan model name suggests that it is not designated as a limited edition, but it should be noted that other recent “JF” GMW-B5000 models have ended production not long after their release. The GMW-B5000MB-1 is also expected to be released worldwide. (Casio Europe also announced the GMW-B5000MB-1ER.) 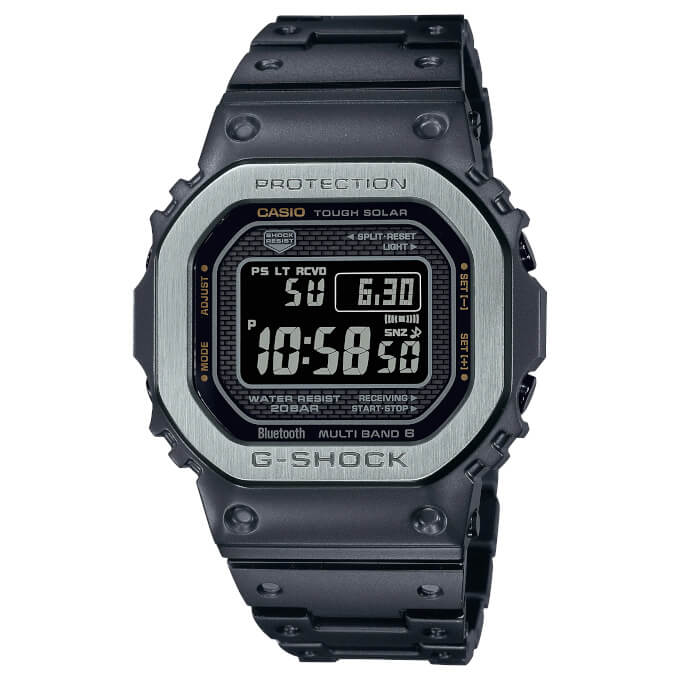 The GMW-B5000MB-1 offers a very masculine and distinctive matte black finish combined with a contrasting silver and brushed front bezel. 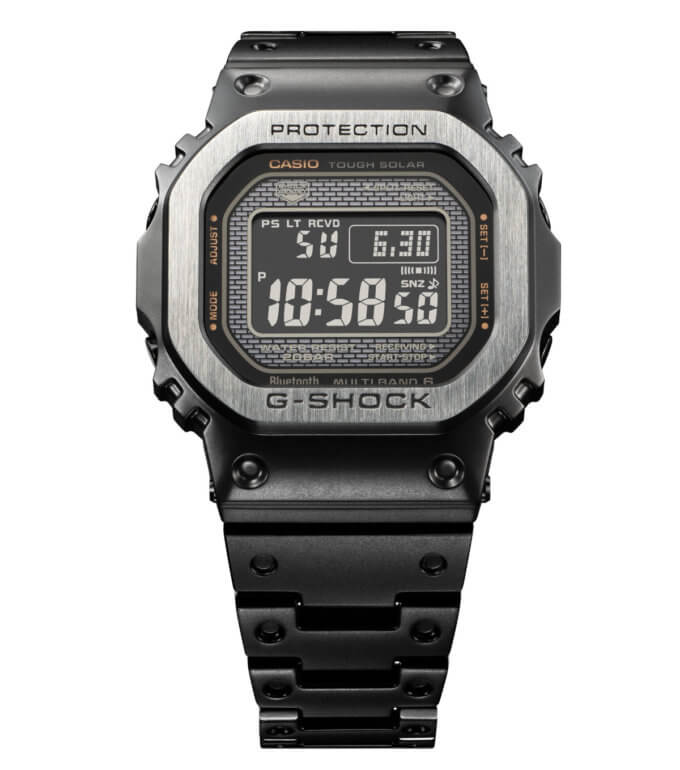 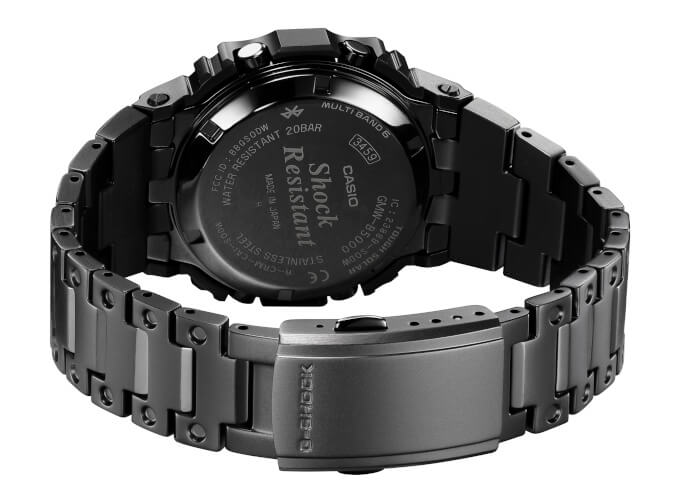 After a string of more colorful and playful designs, the full-metal G-Shock GMW-B5000 series is going back to basics with the GMW-B5000MB-1, which is expected to be released in February.

With its inverted LCD display, the wach has a similar appearance to the basic black GMW-B5000GD-1 at first glance. Though the “1” indicates a black color, it appears to be more of a grayish or dark gunmetal color. The bezel surface apart from the brushed area appears to have a matte finish versus the glossy finish of the GMW-B5000GD-1. As a stainless steel model, the GMW-B5000MB-1 will be more affordable than the recent titanium GMW-B5000TVA-1, and we’re expecting the price to be around $600 in the U.S. (It could end up costing more due to the unique matte finish or possible limited status. The matte finish also brings to mind the limited GMW-B5000V-1 featuring a vintage-style aged ion plating, which had a price of $1,000.) 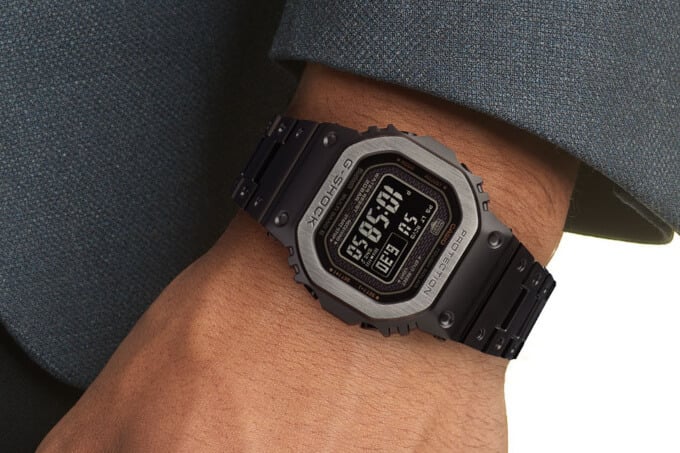 Let them add GPS and we have the best G ever.

It has multiband and Bluetooth already.

Indeed, but self-dependent time zone adjustment would cross the t.

This is a handsome Square. I might have to grab one.

Thanks for sharing! Btw what does full auto LED backlight mean?

An “auto” backlight is a settable feature that will activate the backlight when you turn your wrist to look at the watch, without having to press a button. “Full auto” means it will only activate when it’s dark, so that power isn’t wasted.

Cant wait for this!

Grrr – kind of annoyed that it looks like my GMW-B5000V-1 (full metal black aged). My most expensive G-shock and one of a kind….until now.

I also have the aged black ip, I think our watch is still one of a kind, due to the fact that the bezel of this watch is more of a brushed silver color, where as ours is an all over matte, which I think is nicer personally. this watch isn’t different enough for me to want to get though, if it had a positive display I’d be all over it, but as of now I think our aged ip version is superior. Hope that makes you feel better :)

G Shock UK States it is a Limited Edition

Where would be the best place to buy this? On the actual G Shock website or on the Casio website?

They are basically the same thing, as the online sales for both sites are managed by Digital River. They both state, “DR globalTech Inc. is the authorized reseller and merchant of the products and services offered within this store.” There may be some instances when casio.com has a watch for sale before gshock.com does, and instances where pre-orders are only available on gshock.com.

It should also be available from other authorized retailers.

Thank you for the response! I’ll just have to keep an eye out for both sites then. I see in the article that it was mentioned for a March release in Asia, do we usually know when it becomes available in the US then? Is it usually the same month as Asia or like a month afterwards?

Usually sometime the next month for the U.S., with some exceptions.

I just received mine from G-Shock…and I love it! I have the plain steel and red ILC models and this is more to my liking. The black is more of a deep graphite gray and the matte finish works much better than the bright polished bezels and brushed bracelets of the other metal squares. The combo of the steel brushed bezel and the matte finish case and bracelet is a winner! Cant wait to see these finishes in more colors!

Love this version! Really nice finishing details that can’t truly be appreciated in photos. I have ordered this watch and can’t wait to receive.