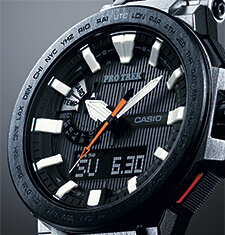 Casio is releasing a new watch from the high-end Manaslu prestige line of Pro Trek outdoor watches which will include the PRX-8000T-7AJF (orange trim) and PRX-8000T-7BJF (green trim) models. The PRX-8000T is designed for maximum functionality and readability in high-altitude environments. The top of the line Manaslu series gets it name from the Manaslu mountain, the eighth highest mountain in the world that was first climbed and summited by a Japanese expedition in 1956. The PRX-8000T is the new flagship model, making it the top of the line Pro Trek watch. Casio America released the PRX8000T-7A with a list price of $1,500. Update (Feb 2016): Casio Japan also added the PRX-8000YT-1JF to the PRX-8000 lineup, featuring a black band and a diamond-like carbon (DLC) coating.

The PRX-8000T was designed with the help of professional mountain climber Hirotaka Takeuchi, the first Japanese climber to climb the world’s 14 highest peaks, and is designed for climbing summits like the Manaslu mountain which is 8,000 meters above sea level. The watch features a large analog display with large white index markers and carbon fiber hands. The markers have a double luminescence coating for good readability in low light conditions. The watch also has an auto dual LED backlight. The back case, band, and other metal components are made of titanium to keep the watch light and feature a titanium carbide coating. Along with Tough Solar charging and Multi-Band 6 radio timekeeping, the PRX-8000T has the battery-efficient Triple Sensor Version 3 which includes sensors for compass bearing, altitude/barometric pressure, and temperature, all vital information for mountain climbers. The watch also has an atmospheric pressure tendency alarm which will notify the wearer of fluctuations in atmospheric pressure and potential weather changes. The bezel, buttons, and crown are treated with a diamond-like carbon (DLC) for extra protection against the elements and the watch face has a scratch-resistant sapphire crystal.

Along with the top-of-the-line G-Shock models, the Pro Trek PRX-8000T is made at the prestigious Premium Production Line at the Yamagato Casio factory in Japan. The PRX-8000T is the most expensive Pro Trek model with a list price of 160,000 yen and will be released on October 31, 2015 in Japan. It will also have an international release as the PRX-8000T-7A and PRX-8000T-7B.

The PRX-8000T-7AJF has a high-contrast display with extra large white index markers and luminescent hands. The second hand is orange along and one of the buttons has a red marking, and the city codes on the dark bezel are subdued. 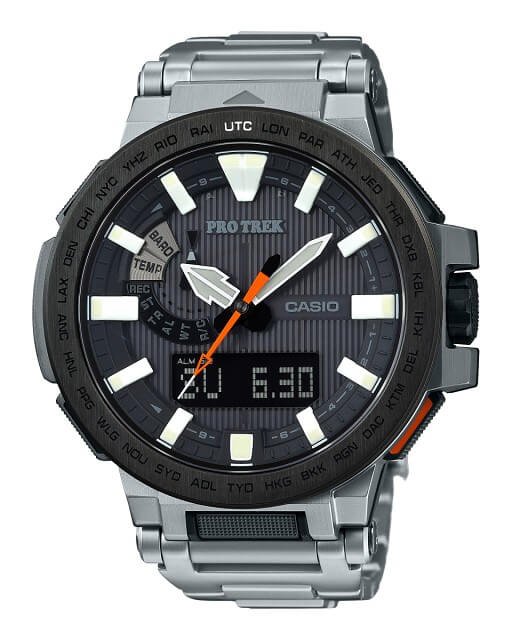 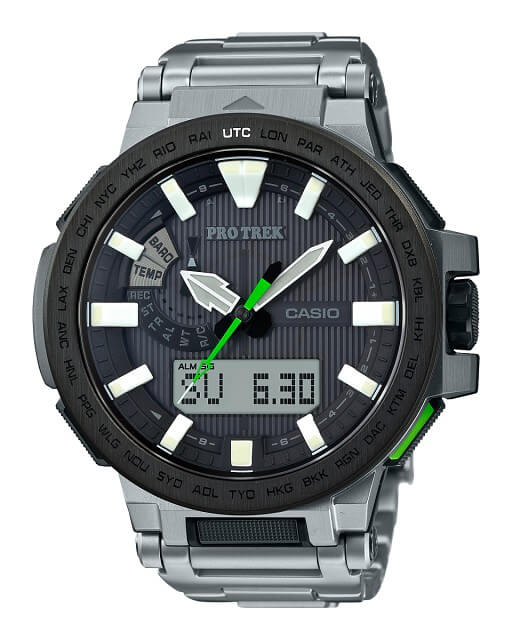 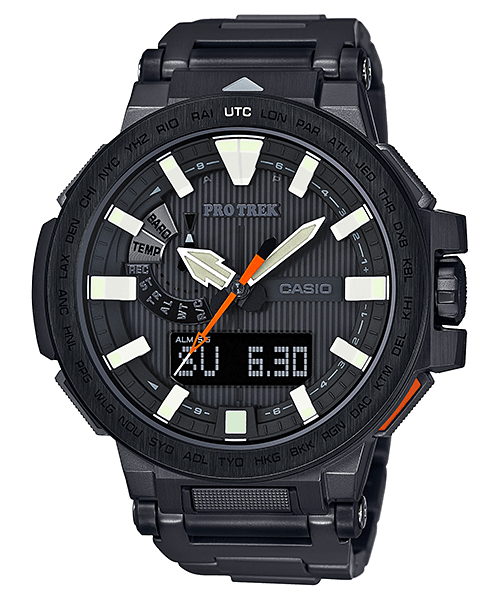 Pro Trek PRX-8025HT-1JR for Pro Trek 25th Anniversary
Disclosure: G-Central is independently managed by fans and supported by ads. We may earn a commission on purchases from our links to Amazon, eBay, and Reeds Jewelers.

Which is the latest manaslu pro trek collection. Is it PRX 8000YT-1JF. Wish to buy the latest in the above series