Casio announced the Pro Trek PRW-7000FC-1B and PRW-7000FC-1BJF for an Asia and Japan release in July 2017. This black and white model is similar in looks to the recently released PRW-7000-8, but that model was a dark gray color and had a light blue accent on the display, and this model has a composite band made of metal and resin parts. The PRW-7000FC-1B is one of the most straightforward PRW-7000 designs, offering a simple all-black color scheme with white hands and markers. A white luminescent coating is applied to the top of the hour markers, providing contrast for easy viewing outdoors and visibility in the dark. The reverse STN LCD display complements the overall dark look.

Though the Casio sites list this model as having a resin band, the model number (including “FC”) and photo show that this model has a composite folding clasp band like the PRW-7000FC-1. The Japanese list price of ¥90,000 JPY suggests this is the case as well. 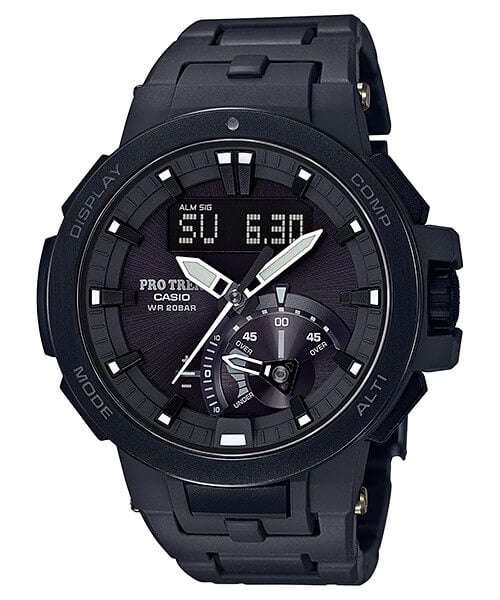 Pro Trek PRW-6611Y-1 and PRW-6621Y-1: Eco-friendly biomass models with large analog-digital display
Disclosure: G-Central is managed by fans and supported by ads. We may earn a commission on purchases from our links to Amazon, eBay, and Reeds Jewelers. Please follow your country's official G-Shock site for additional release information.

…there is a new limited Edition PRW-7000 coming up: