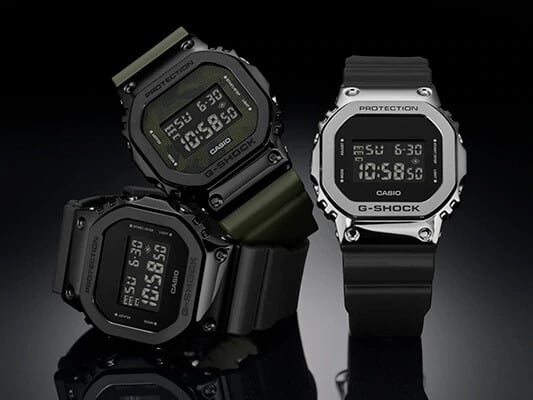 Casio states that these models have the same design as the resin-made 5600 line but with the addition of a stainless steel bezel with a quality finish. The inner module case is made of resin like the DW-5600 and offers a lighter weight than the premium full-metal GMW-B5000 models.

The features are the same as the DW-5600 and include shock resistance, 200-meter water resistance, stopwatch (1-100 second for the first 60 minutes, 1-second after 60 minutes, max 23:59’59 with elapsed, split, 1st and 2nd place times), countdown timer (1-second units, max 24 hours with auto repeat), multi-function alarm, hourly time signal, full-auto calendar, 12/24 hour format, flash alerts, and EL backlight with afterglow. The dimensions are 49.6 x 43.2 x 12.9 mm and the weight is approximately 73 grams. That is slightly longer and wider, but thinner, than the DW-5600.

A September 2019 release is expected in Japan and Asia. 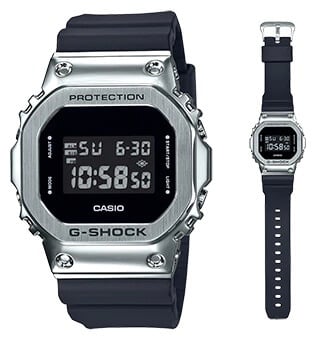 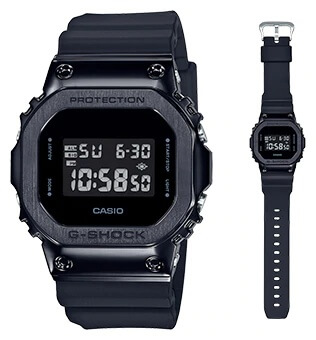 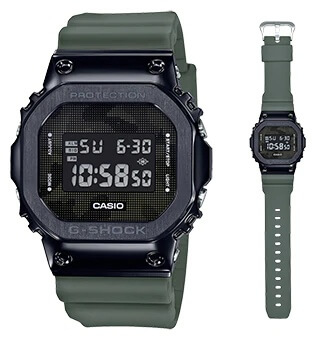 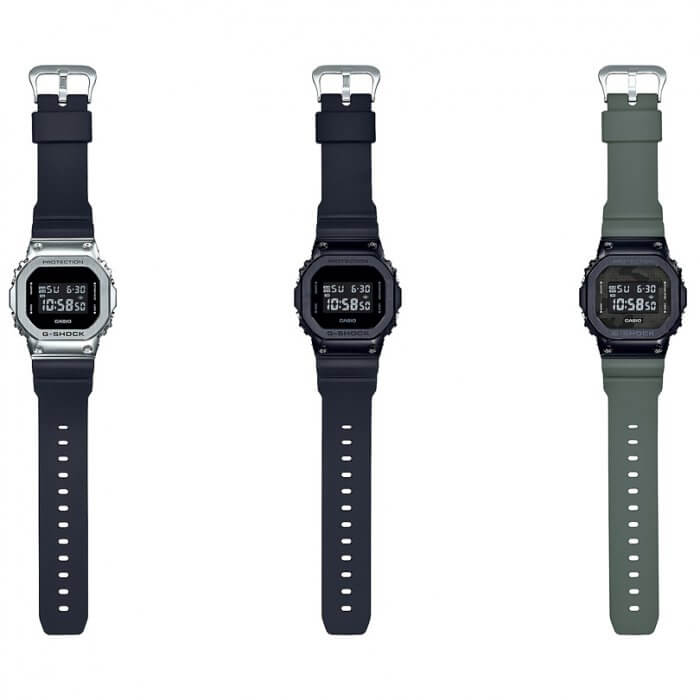 An affordable G-Shock 5600-series watch featuring a metal bezel will be making its debut soon. The G-Shock GM-5600 will reportedly be launched in September 2019.

One of the debut models will be the GM-5600-1 (GM-5600-1ER in Europe) with a silver bezel and black resin band which will reportedly sell for €200. There will also be more expensive black IP versions with black or olive green resin bands. These metallic bezels are presumably made of stainless steel. The module is reportedly similar to the DW-5600 and is battery-powered. Also, all three debut models have negative LCD displays. The GM-5600 reportedly has a resin inner case like the DW-5600, unlike the fully stainless steel GMW-B5000.

The GM-5600 will provide an affordable alternative to the GMW-B5000 and seems to be a necessary addition to combat the counterfeit metal G-Shock cases that have appeared in the GMW-B5000’s wake. Though it remains to be seen if there will be any versions with a stainless steel band, it’s hard to imagine there won’t be somewhere down the line. This release also leads us to believe that a metal version of the DW-6900 is inevitable.

Yes, it would be great if Casio sold more spare bezel and band parts in a variety of colors and materials, but not all of the different square models use the same size bezel. Also, we’re not yet sure if this new GB-5600 is just like a DW-5600 with a metal bezel simply replacing the resin one, or if the other parts of the watch’s structure and module are redesigned to accommodate the metal bezel and retain its shock resistance. Sorry, but I removed your YouTube link because that video is advertising where to buy unauthorized parts. While I am not totally against custom bezels and bands being sold, the shape of this bezel is the same as an original bezel and it has a G-Shock logo on it, so I feel like it should be considered a counterfeit item and Casio probably wouldn’t approve.

Anyone has to admit that our Chinese players are ahead of Casio. We took the lead in manufacturing and using transparent shell accessories and metal shell accessories for basic models rather than for new Bluetooth models. We just want to broaden DIY’s vision, not just limited to the use of original accessories. If Casio first introduced these accessories, who would make them himself? It’s impolite to say that we are fake. Due to the small market of 5700, there is still no suitable metal shell for 5700.If Casio is sincere, please produce new Bluetooth 5700 and adapted metal shell for 5700 fans!

The band is completely different from the original one.. ☹️ Why??

This is a similar band to the 5600ms series. I like that band, its thicker, wider, and i feel it is more comfortable