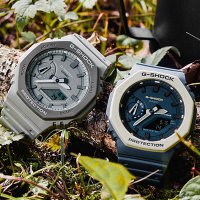 Considering the popularity and sold out status of past models like the GA-2100-1A1 and the GA-2110SU-3A, these new GA2110ET Earth Tone models are bound to be big sellers and will probably sell out as well. (Pre-orders for the GA-2110ET-8AJF sold out in Japan.) The GA-2110 series features a dual-molded bezel that offers a different bezel color from the body. The GA2110ET-2A has an off white bezel with a navy blue body and band. The GA2110ET-8A has a dark gray bezel with a lighter gray body and band. The GA2110ET-8A is notable for being the first GA-2100 model available in the U.S. with a standard (non-inverted) LCD display. 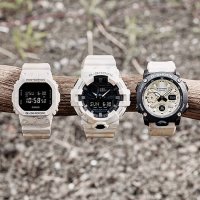 Also available are the DW5600WM-5, GA700WM-5A, GA2000WM-1A from the Utility Wavy Marble series. These watches have a mixed-molded bezel and band with a marbled look.