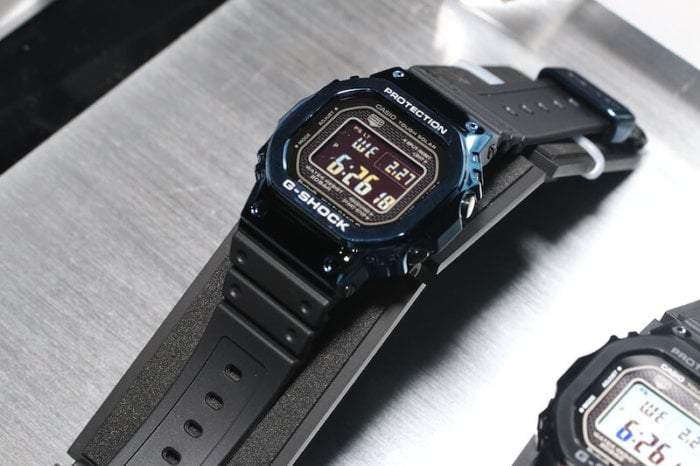 Casio is adding two more resin-band models to the G-Shock GMW-B5000 stainless steel square family. The GMW-B5000G-1 has a black IP bezel with an STN LCD display and the GMW-B5000G-2 has a blue IP bezel with a reverse STN LCD display. Both models also have IP-treated black buckles, black buttons, and band keepers (of their respective color) along with a black resin band which is made of soft urethane. These models also have a DLC-coated screw-lock case back.

With the resin band, these watches have a lighter weight of 96 grams compared to the GMW-B500D-1 (167 grams) and other IP-treated models with a stainless steel band. 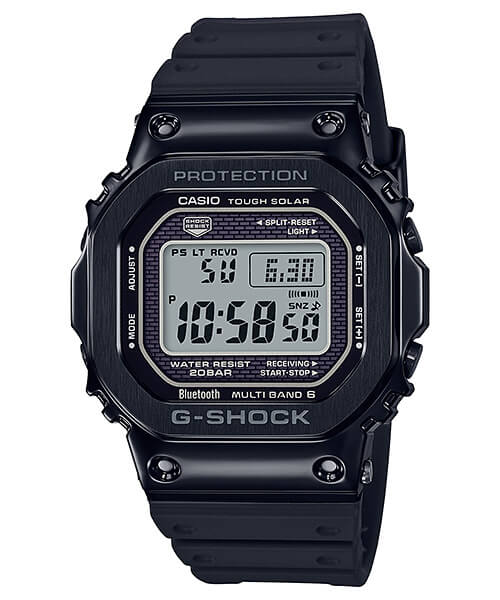 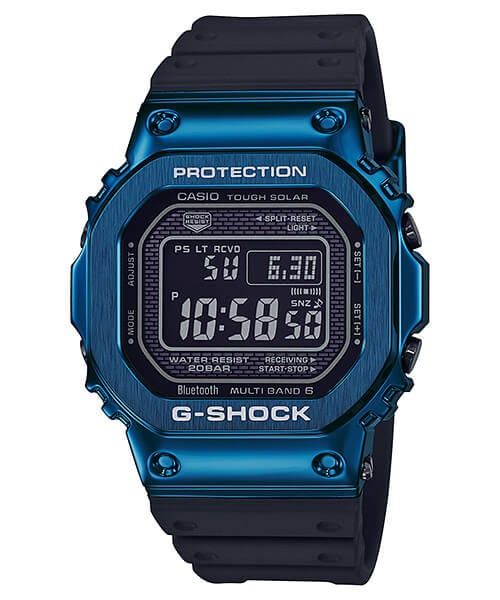 Nice, but I’m still hoping for metal square with a brush finished on the lugs to match the bezel area.
One complaint with these GMW-B models is that the Bluetooth time sync “overwrites” the atomic sync – meaning the moment you connect it to the phone app it will prioritize Bluetooth and not bother with Multi-Band anymore, and the only way (according to forums) to reverse that is to disconnect and reset the watch.

Question: You mention that these have the same soft urethane resin band as the GW-5000-1JF. Does this mean the current resin metal square model, the GMW-B5000-1JF, also has the same band? From what I’ve read, it’s not the same and the band is stiffer (and wider), closer to the “regular” bands on the 5600/5610 series.

these will look good next to the silver and gold models

I have been waiting in anticipation for a full metal square with a positive display and a black resin band.

I just bought the black IP with strap version of this watch and I am absolutely over the moon with it. Glad to see the strap is different from the std 5600 series. Black plus strap is far more subtle than the all-bracelet models. Plus the weak point of the classic square model- the last line on the case- is perfectly straight and will remain so.

I wonder if these watches will be compatible with the composite bracelet that the 5610 uses. I absolutely love my frankenshock GW5000 with the 5610 bracelet and I was hoping that they would have released the Gmetal watches in black DLC with a positive display (cant stand reverse), but being able to use the 5610 bracelet would be a perfectly acceptable compromise for me.

They did release a black DLC version with positive LCD display (for $1,200) but it was limited to 500 pieces and quickly sold out.
https://www.g-central.com/g-shock-gmw-b5000tfc-1-limited-full-metal-with-dlc-coating/

The blue version is my favorite.. but why does Casio insist on putting so many of their great models with reverse LCD when it is harder to see except in bright light and it seems like most people don’t like it? I just don’t get it.. I’d spring for this beautiful brushed Blue finish if it had the positive LCD in blue tone like my teal Japan 5610!

Because some watches look better with a reverse LCD, and people buy them.

The gmwb5000 neg displays are phenomenal, thanks to STN. I am with you on negative displays overall, but I make the exception on these.

I am so tempted to buy the all steel black and grab the blue bezel from pacparts. I think that would be killer. Even better if Casio released an all steel blue version!… or an all steel red!!!