There was a time when G-Shock watches weren’t the wrist monsters that they are today, and that time was actually not very long ago, as the shift towards bigger cases started in the 2010s. People with smaller wrists may be daunted by the prospect of wearing a Mudmaster GWG-1000, but there are still many smaller G-Shock watches to choose from. These are the models that are commonly referred to as “mid-size” and include the classic models as well as some newer ones.

Please read this before dismissing the large G-Shock models:

When talking about small wrists, I generally mean wrists that are around 6 to 6.5 inches (15-16.5 centimeters). I don’t believe that a Mudmaster GWG-1000 or Rangeman GW-9400 is necessarily too big for a wrist of this size. Some people get a bit self-conscious about wearing a large watch, and I am guilty of this myself. I have a 6.5-inch wrist and I initially thought that the G-9300 Mudman was too large as well as the GWN-1000 Gulfmaster, but I was used to wearing smaller watches my whole life and I eventually got used to wearing the larger ones. Even now when I look at the Gulfmaster on my wrist it seems very large (but feels perfectly comfortable). However, when I see photos of myself wearing the watch it looks fine and not excessively big, and I have come to appreciate the size of the display. Nobody has ever commented about the watch’s size but I have received compliments on its looks. There is no set of rules that says certain models are too big for certain wrists, as G-Shock watches are designed to accommodate a wide range of sizes and can fit comfortably on smaller wrists. Once you get used to a G-9300 or GA-100, then the models that are larger than those are not so much of a stretch. Sometimes the thought of a G-Shock being too big is just an ingrained bias that can be overcome, but you should only wear what you’re comfortable with.

Here is an overview of the mid-size G-Shock watches that are suitable for small wrists. 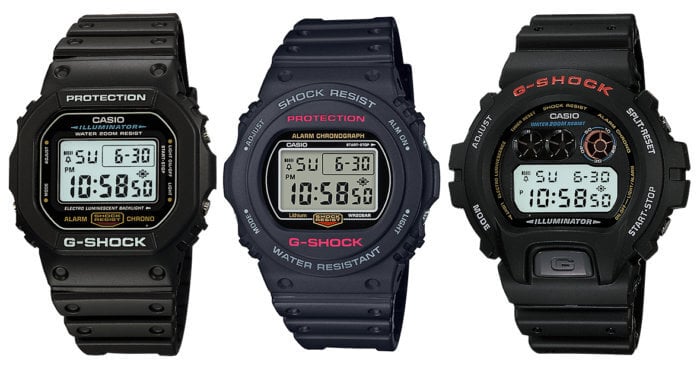 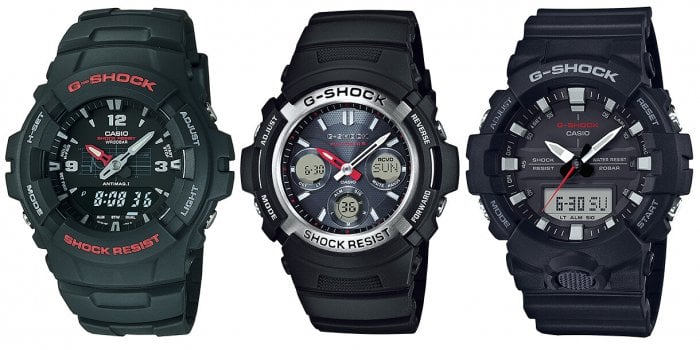 Those who prefer analog-digital G-Shocks should consider the basic G-100 (also on our affordable list above), AW-591, and the solar-powered AWG-M100 series (amazon link). More recent options include the GA-800 series which is the most affordable G-Shock with a third analog hand to display the second, and the fitness-oriented G-SQUAD GBA-800 with a built-in pedometer and Bluetooth link. The GA-2100 is a recent and wildly popular mid-size analog-digital model that is the slimmest G-Shock currently available. Another recent analog-digital model, the GA-2000, might be considered mid-size, as it is smaller than the GA-100, but getting close to a large size. The recent and best-selling GA-2100 series, which is the slimmest men’s G-Shock, is another analog-digital model that is suitable for smaller wrists.

The mid-size G-Shock G-STEEL watches are the best option for those who want a more upscale style of analog watch (particularly with the models that have a stainless steel bezel or band). These solar-powered 300-series models include the number 300, 310, or 330 in the model numbers. Note that the G-STEEL 100-series models are the larger size. The 300-series watches are close to a large size but significantly smaller than the G-STEEL 100-series models. The 330 models include the Neon Illuminator, a black light LED that makes the hands and markers glow in the dark. 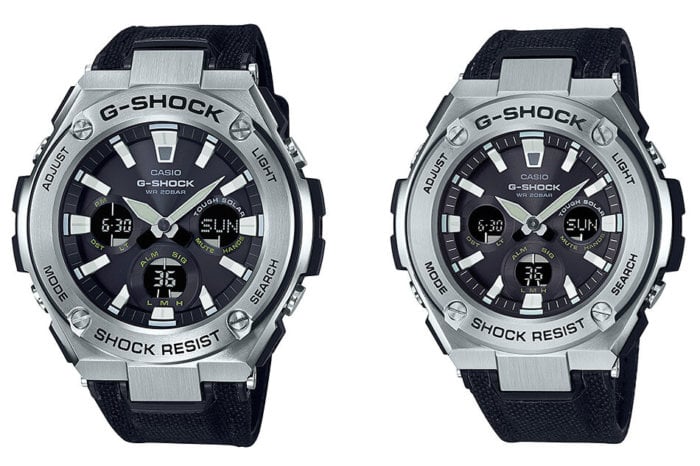 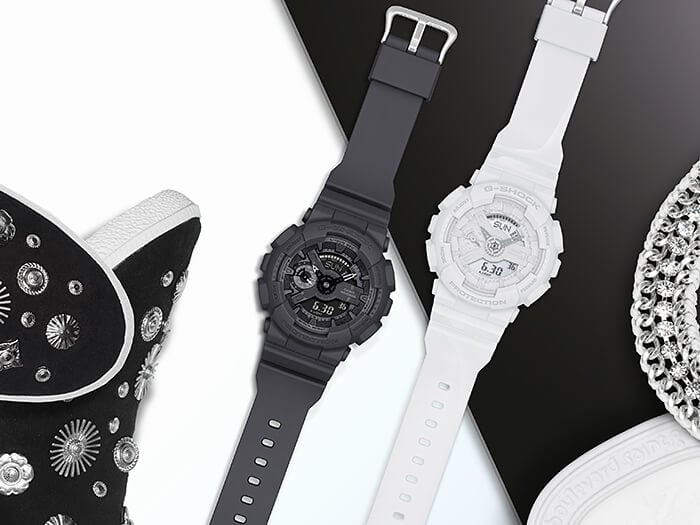 The G-Shock S Series is a specialty line of smaller G-Shock watches created for women, but recent models have more unisex styles like the Military Collection and Metallic Face Series. These watches are about 30% smaller than their large-case counterparts. They are recommended for those with smaller wrists, women, teens, and older children, but are also a viable option for anyone who just wants a smaller G-Shock. 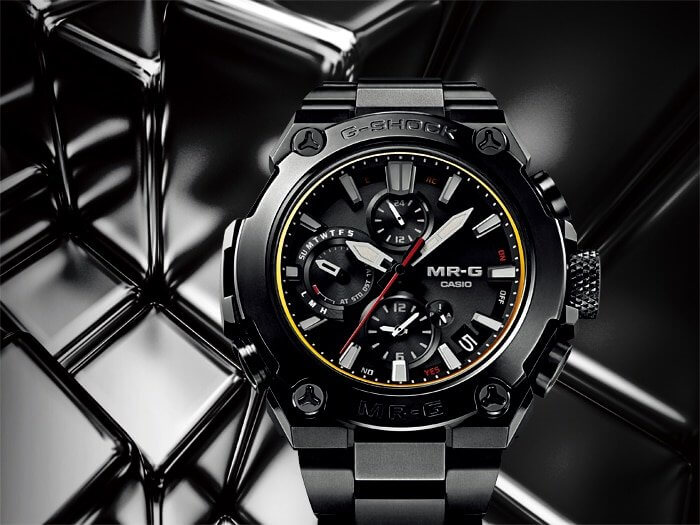 Another small G is the G-7700. It uses the same strap as the AWG-M100, and seems to be roughly the same size. The G-7700 module has lots of nice features, like the lap timer memory, programmable hourly chime times, daily/weekday/weekend alarms, week number, day number & remaining days in year, three time zones visible in world time mode, and probably some others I’m forgetting.

Thanks, yes that is a mid-size G-Shock which is not in production anymore but still available on Amazon.
https://amzn.to/2MNCkMf

You’re right, but I don’t think it is being produced anymore and it is very difficult to find.

Is there one that has the same diameter as the AW-590 but has stainless steel band? Thanks.

Though they are a little larger I would suggest one of the G-STEEL 300-330 models mentioned and linked to above.

This is a great post and discussion. Do you recommend any small/medium sized G-SHOCK (or non G-SHOCK) that has vibration alarm/alert? Only resonable model I found was W736H..

I only know of the G-Shock GD-350 but that is a larger watch. Also the Pro Trek Smart WSD-F30.

Under “MID-SIZE ANALOG-DIGITAL G-SHOCK WATCHES” there is a photo of 3 watches. What model is the watch to the right? It has a red second hand.

Hi there,
I’m a woman and wondering if GD-350 straps would fit for my 15cm wrist? I don’t mind about the large bezel, diameter… Thanks a lot.

Yes, the strap will fit.

I am looking for a mid-size g-shock that has a solar battery, atomic time and a compass. Does it exist?

GW-9300 Mudman (import version) is the closest to that, smallest G-Shock with compass and Multi-Band 6, but it’s not mid-size, more like large.

In short there isnt any 🙂
Casio should take heed and aknowledge the suscess of the GA-2100 because of the thinness and relatively medium size.
If they create thin G-shocks (under 12mm) and lug to lug under 48 and size below 43… they will access a big market: small wrist.
I also bet millennials have slender wrists 🙂

After going bigger in the 2010s, G-Shock has been shifting back to more mid-size models recently.

What range GAW-100B-1AER would be in please? I got an just over a 6 inch wrist. Wondering if it would appear large on me. Many thanks.

I would consider that model to be extra-large.

G-Central, thank you very much for such prompt reply, really appreciated. its such a shame that the watch is slightly on the bigger side, I really like it, but a touch big on my skinny wrist. Had a look of AWGM100B-1ACR which appears to be a slight smaller with similar specs. Any advice on this model?

Yes, that is considered mid-size and it would probably be a better fit for you. That is actually the smallest of any Tough Solar analog-digital G-Shock.

Hi mate, I’ve got about a 6.3/4″ wrist, and I just bought a 5600 blackout cloth series watch, I previously bought a cheap (£10 at half price) casio digi watch for work so I didnt ruin my swatch, and found it so useful I regretted not buying a nicer item.
I would have loved the GD350 1BER I was covering, but when I looked at the measurements…

I chose the 5600 because I felt the big chunky g shocks would look ridiculous on me, and I stand by that,
I chose the cloth (cordura) strap because it looks cool, and would be comfortable, but it’s really scratchy, gets sweaty and irritates your skin, and if you get it wet, takes ages to dry.
also, having such skinny wrists, my old watch, when you have it a little larger, the weight of the watch is not an issue, but with the g shocks weight, with regard to the strap size, (it’s either too tight on the 4th setting, and the cordura band irritates and makes you sweat like mad, or too loose on the 5th and the bulk of the watch makes it move around.

I’ve ordered a generic aftermarket replica resin band to try, and also a velcro strap to use with the strap fitments I have. One, or both solutions should solve my problem. The fabric band raises the watch a couple of mm again, making it look less slick.

I wouldn’t recommend going bigger than that type of watch, I would recommend getting the normal resin strap, if you have the same issues I did with strap size vs watch weight, you can always buy the strap attachments for a couple of quid, and a velcro strap will allow you to tighten it or loosen exactly. (Hopefully)…

This is a wonderful thread and the article is even better!
there is not much out there on this subject with a format like this which is clear, legible, and complete with matching pictures for each paragraph -good job!
I just recently started getting into G-Shock for my line of work of armed security…. I bought in the same day the GW 7900 atomic multiband moon phase tide graph and everything I needed..
I also got the G 9100 Gulfman! I was looking to see if you listed that under midsize.. what do you think about the G9100 gulfman?? I think it’s perfect mid-size for a G-Shock! It is a little smaller than my GW 7900 which I agree with the article you wrote that the GW 7900 is almost a midsize G-Shock but it is a little bit thick and doesn’t quite make it but for some it could wear like midsize.. if that one almost makes it and the 9100 is smaller I would say the 9100 is perfect mid-sized whatcha think?

Thank you. Yes, I think the G-9100 Gulfman is mid-size and added it to the article. Most of the older G-Shocks that were launched before 2010 are mid-size, with some exceptions. I agree that the G-7900/GW-7900 is on the border of mid-size to large, and it could be considered mid-size, but it is often referred to as a big case.

Thank you for your reply ! I’m glad you added the gulfman G 9100 to the midsize list!
There are people out there who really like G-Shocks but cannot wear them due to their extremely large size and I think you would probably agree that the trend over the past few years has just gotten bigger and bigger perhaps it’s time to go back to the midsize/ large but not gigantic..
Anyways, I’m just giving these folks some options.. I’m 7.4 inch wrist so I’m about average I’d say
My other question for you was what else is similar to the Gulfman G 9100 in terms of looks?? I don’t mind it being a model introduced prior to 2010 I just don’t want to go way back to the 90s thank you my friend